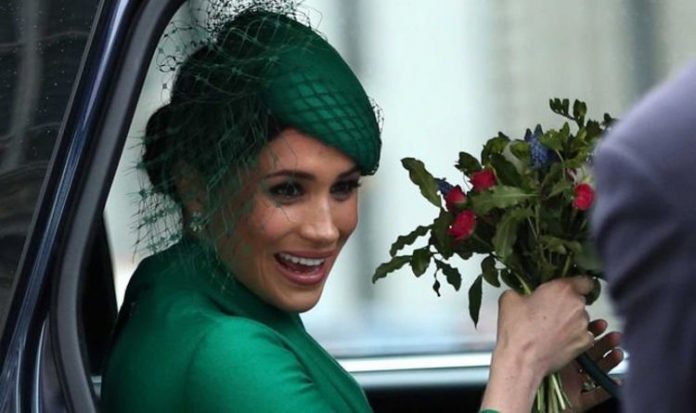 Meghan and Harry were originally reported to be planning on making a reality TV show about their lives, however a representative has since denied the claims. The Netflix deal sparked outcry from royal commentators who believed Meghan and Harry were abusing their titles to gain leverage in contract negotiations. Norman Baker, Crime Prevention Minister, told Good Morning Britain Harry has “divorced himself from the royal family” and is “clearly exploiting” his connections to Buckingham Palace. He added: “HRH means he is representing Britain abroad, and he’s not representing Britain abroad. He’s clearly divorced himself from the royal family in practical terms.”

Despite the denial, insiders close to the couple claimed they pitched behind the scenes home video of their life as royals to Netflix according to The Daily Mail.

It followed the Sussex royals announcing their £112 million deal with the streaming giant.

The couple were initially believed to be eyeing up producer roles rather than on-screen performances with their deal.

A representative for Meghan and Harry has categorically ruled out any chance of a Sussex royal reality show.

In a statement sent to Deadline, the representative said: “The Duke and Duchess are not taking part in any reality shows.”

Netflix was more cagey on details however, and refused to confirm what shows the couple’s would be making.

They said to RadioTimes: “The couple already has several projects in development, including an innovative nature docuseries and an animated series that celebrates inspiring women but we are not disclosing any of the programming slate at this time.”

A source close to the couple said Meghan and Harry will be followed by cameras for three months to capture their day-to-day lives.

They added: “They may have had all these lofty ideas about producing epics highlighting environmental causes and the poverty gap, but Netflix obviously want their pound of flesh.

“Much of the docuseries will be about their philanthropy rather than what they get up to behind closed doors.

“But it will still be a fascinating insight and Meghan hopes viewers will get to see the real her.”

Meghan and Harry’s million pound deal with Netflix followed their decision to step back from the Royal Family in March.

Since then, the couple have moved to Montecito, California and have bought their first home before signing with the streaming giant.

Exact details of the couple’s contract with Netflix have not been revealed, but Meghan and Harry were rumoured to be looking to be more involved in production.

The couple also said in a statement announcing the deal they will be focusing on “creating content that informs but also gives hope”.