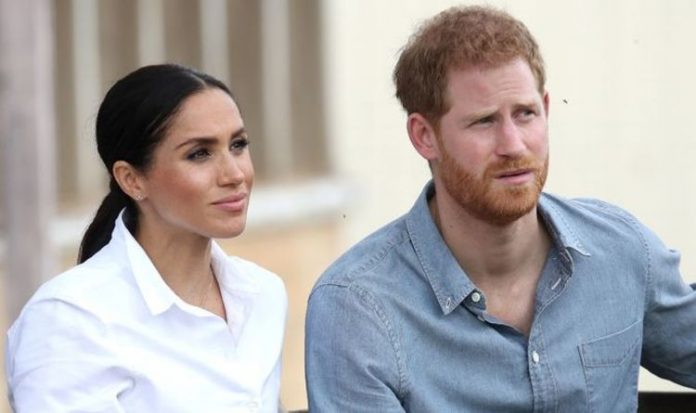 Meghan Markle and Harry: Piers pretends to vomit at podcast

The Duke and Duchess of Sussex have set up new production company, Archewell Audio, and signed a deal with audio streaming service Spotify. But a new poll by YouGov suggests the majority of Britons are not interested in listening to Meghan and Harry’s podcasts.

Meghan and Harry’s Spotify deal was announced earlier this week.

It comes just months after they signed a deal with Netflix rumoured to be worth more than £100 million.

Meghan and Harry’s podcasts do not interest most Britons, a new poll suggests (Image: GETTY)

The Duke and Duchess of Sussex have set up new production company, Archewell Audio, and signed a deal with audio streaming service Spotify (Image: GETTY)

The Queen’s grandson and the ex-Suits star said: “What we love about podcasting is that it reminds all of us to take a moment and to really listen, to connect to one another without distraction.

Harry and Meghan will host a “Holiday Special” which is due to be released in the coming weeks.

Royal expert Penny Junor warned the Sussexes, who quit royal duties for a new life in the US, are likely to face “bear traps everywhere” as they pursue their own commercial activity.

A new poll by YouGov suggests the majority of Britons are not interested in listening to Meghan and Harry’s podcasts (Image: GETTY)

She said their deal with Netflix had already proved controversial because of the portrayal of the royals in The Crown.

Royal author Ms Junor said: “I think unhappily, it is very difficult to square up being a member of the Royal Family with commercial activity because there are bear traps everywhere.

“I’m sure it never crossed Harry and Meghan’s minds about The Crown, possibly being negative or damaging when they got their wonderful contract from Netflix.

Ms Junor said that interest in the couple is due to their royal status.

While Meghan and Harry quit as senior working royals in March they have hung onto their HRH styles, although they do not use them.

The royal author said: “Inevitably, because of who they are, there will always be a market for them.

“That adds a huge number of noughts to the end of any deal that they do.

“That’s not their fault. It just highlights how difficult it is to square up being a member of the royal family but earning a living outside it.”

Meghan and Harry are living in an £11 million mansion in California with their young son Archie.

Ms Junor added: “They’re living in an extremely expensive house with a lot of very expensive running costs and a very extravagant lifestyle.

“The big question when they moved was how were they going to support themselves?”

Ms Junor said of the Spotify deal: “If this is a way of doing that – it’s unusual for members of the royal family but so is this whole situation – my feeling is, slightly, good luck to them.

“Don’t judge them until it’s all gone pear-shaped.”