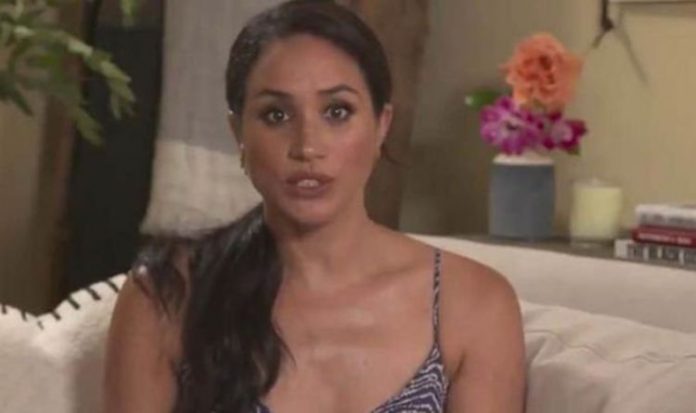 Meghan made the clumsy comparison during a 15-minute panel at the Fortune’s Most Powerful Women virtual summit. The Duchess of Sussex expressed concern over the way people use social media and how these platforms can become addicting due to algorithm designed to keep users engaged. As she expressed her “concerns” over an excessive use of these websites, Meghan said for many people social media have become an addiction.

She said: “I have made a personal choice to not have any account so I don’t know what’s out there and for many ways that’s helpful for me.

“I have a lot of concerns for people that have become obsessed with it and so much a part of our daily culture for so many people that it’s an addiction, like many others very things in this world.

“And there is something in there algorithmically creating this obsession that I think is very unhealthy for people.”

However, the Duchess remarks were deemed “offensive” by social media users who have experienced addiction to drugs or have seen loved ones suffering from it.

One Twitter user said: “Many families have been touched by addiction issues, mine included.

“This is a disgustingly ignorant analogy from someone who is just lashing out at social media because she dislikes her critics.

“The more she talks, the more people she offends…”

Another, replying to this comment, said: “I have just said the same thing myself I am a former addict and have known over a dozen people who have died due to drug overdoses.

“Hardly in the same boat is it”.

A third Twitter user added: “My family has been touched by addiction issue’s too, I find what she said offensive.”

Other social media users defended the platforms, saying they have been helpful to keep in touch with others – in particular during the months of lockdown.

One said: “Especially since social media and the internet have given so many people a feeling of hope and connection.

“Prolonged my fathers life to be able to connect on his terms.”

During the Fortune virtual summit, the second Meghan has attended over the past few weeks, the Duchess of Sussex explained social media users should not “hate share” but, rather, “amplifying only the positive”.

She said: “You don’t reward bad behaviour with your dog, so you shouldn’t do it with anything else.”

Meghan and Prince Harry have made social media and the use people make of them one of the main focuses of their work.

Prince Harry had already denounced these platforms in an op-ed for Fast Company, claiming they were stoking the crisis of hate and misinformation.

Three weeks ago, when she first attended a Fortune summit, the Duchess revealed Archewell, the foundation yet-to-be-launched by her and Harry, is focused on the digital world.

She said: “Part of our focus with the Archewell Foundation is to just ensure that we are helping foster healthy positive communities—online and off—for our collective wellbeing.

“It really just includes not contributing to or even clicking on misinformation.”

More recently, Meghan and Harry spoke together about their experiences with social media during an episode of Teenager Therapy podcast.

The Duchess highlighted the impact online trolling can have on everyday’s life.

She said: “Not just for a younger age range but for everyone, especially for your point during COVID, if you are not in school then you are finding yourself on your devices or online more, right?

“And there is a lot of vulnerability there that I think so many people are experiencing.

“Yes, it’s a great way to connect but it also ends up being a place where there is a lot of disconnection.”

Opening up on the impact online hate can have on people, the Duchess continued: “I can speak personally too, I am told that in 2019 I was the most trolled person in the entire world – male or female.

“Now, eight months of that I wasn’t even visible, I was on maternity leave with the baby.

“But what was able to be manufactured and churned out it’s almost unsurvivable, it’s so big you can’t even think what that feels like.

“I don’t care if you are 15 or 25, if people are saying things about you that aren’t true, what that does to your mental and emotional health it’s so damaging.

“So from my standpoint and for the work that we do is that from my personal experience and be able to talk to people and understand that even though our experience is unique to us and obviously can seem very different from what people can experience from day to day, it’s still a human experience and that’s universal.