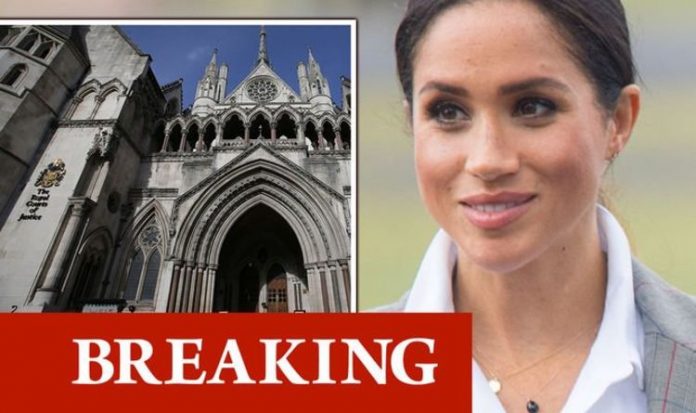 The Duchess of Sussex sued Associated Newspapers Ltd (ANL), the publisher of The Mail On Sunday and MailOnline over a number of published news articles which printed parts of a handwritten letter she sent her father back in August 2018. She has been seeking damages for alleged misuse of private information, copyright infringement and breach of the Data Protection Act over five articles, which were published in February 2019 and contained extracts of the letter. The full trial was due to be heard at the High Court this month, but the case was adjourned until autumn 2021 due to a “confidential” reason.

Mr Justice Warby ruled this afternoon that publishing Meghan’s letter to her father was “manifestly excessive and hence unlawful”.

The judge said: “It was, in short, a personal and private letter. The majority of what was published was about the claimant’s own behaviour, her feelings of anguish about her father’s behaviour – as she saw it – and the resulting rift between them.

“These are inherently private and personal matters.”

He ruled: “The claimant had a reasonable expectation that the contents of the letter would remain private.

Meghan Markle has been told whether parts of her case can be resolved without a trial (Image: GETTY)

“The Mail articles interfered with that reasonable expectation.”

The judge added: “There is no prospect that a different judgment would be reached after a trial.”

Mr Justice Warby also found that the publication of the letter did infringe her copyright.

But the judge added the issue of whether Meghan was “the sole author” of the letter or Jason Knauf, formerly communications secretary to the Duke and Duchess of Sussex, was a “co-author” should be determined at a trial.

The Duchess of Sussex sued Associated Newspapers Ltd (ANL), the publisher of The Mail On Sunday and MailOnline (Image: GETTY)

Mr Justice Warby said that there would be a further hearing in March to decide “the next steps” in the legal action.

Meghan’s data protection claim was not considered at the hearing in January and is therefore still outstanding.

Meghan’s lawyers had argued Associated Newspapers Limited (ANL) has “no prospect” of defending her claim for misuse of private information and alleged breach of copyright over the publication of the letter.

This would be a legal step that would see those parts of the case resolved without a trial.

Justin Rushbrooke QC, who was representing the duchess, said the letter was “a heartfelt plea from an anguished daughter to her father”, which Meghan sent to Mr Markle “at his home in Mexico via a trusted contact … to reduce the risk of interception”.

He added the “contents and character of the letter were intrinsically private, personal and sensitive in nature” and that Meghan therefore “had a reasonable expectation of privacy in respect of the contents of the letter”.

Mr Rushbrooke said at the time: “It is as good an example as one could find of a letter that any person of ordinary sensibilities would not want to be disclosed to third parties, let alone in a mass media publication, in a sensational context and to serve the commercial purposes of the newspaper.”

He also argued that “there is no real prospect of the defendant establishing that the claimant had no reasonable expectation of privacy in relation to the contents of the letter and the defendant’s contentions to the contrary are utterly fanciful”.

Mr Rushbrooke continued that, even if ANL was justified in publishing parts of the letter to Mr Markle, “on any view the defendant published far more by way of extracts from the letter than could have been justified in the public interest”, saying the Mail’s “use of the letter was and is manifestly disproportionate”.

In relation to Meghan’s copyright claim, Ian Mill QC, also representing the duchess, argued that “she and she alone” created a draft of the letter to her father “which she then transcribed by hand”.

He also said the letter to Mr Markle was “an original literary work in which copyright subsists and is owned by the claimant” and asked the court to “grasp the nettle and decide the issue at this hearing”.

ANL claimed Meghan wrote the letter “with a view to it being disclosed publicly at some future point” in order to “defend her against charges of being an uncaring or unloving daughter”, which she denies.

Antony White QC, who was representing ANL, said in written argument that the case was “wholly unsuitable for summary judgment”.

Mr White told the court last month there was “uncertainty as to a number of significant factual matters which can, and should, be investigated at trial when the court will have the full picture in terms of disclosure and evidence”.

He added that a letter from lawyers representing four former employees of the Duke and Duchess of Sussex indicated they would be able to “shed some light” on the drafting of Meghan’s letter to her father.

He told the court it was also “likely” there was further evidence about whether Meghan “directly or indirectly provided private information” to the authors of an unauthorised biography of the Duke and Duchess of Sussex, Finding Freedom.