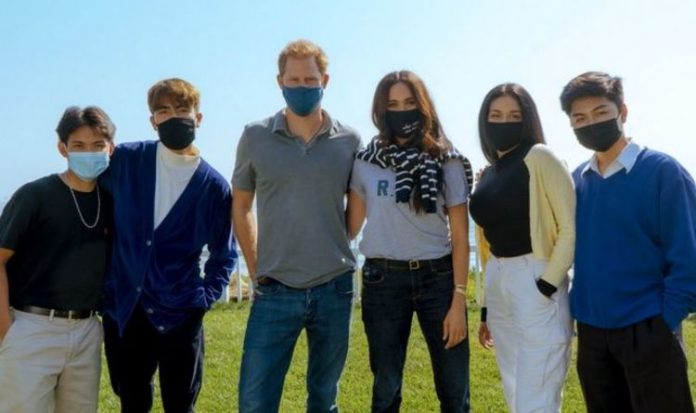 Meghan, Duchess of Sussex, rocked the grey top which featured the feminist icon’s initials “RBG” as she spoke on a podcast about mental health. She also wore a black face mask with Ms Ginsburg’s quote “When there are nine” embroidered on it.

The quote is seen as Ms Ginsburg’s most famous phrase about having more women in the US Supreme Court.

Ms Ginsburg’s death triggered a huge political debate as it gave President Trump a chance to appoint a more Republican justice to replace her.

Opposition groups urged Mr Trump to delay appointing a new justice until after the presidential election in November.

The Duchess of Sussex and Prince Harry spoke for the Teenager Therapy podcast to mark World Mental Health Day.

The couple spoke about “prioritising mental health, removing stigma around the issue, and how we can all contribute to a healthier world”.

The Sussexes discovered the podcast after reading a New York Times profile about the show.

The podcast is hosted by five students from the Loara High School in Anaheim, California.

“With that comes a lot of perspective. When you look back on something, it doesn’t seem that big. “

Prince Harry revealed how the Sussexes have coped with being in the spotlight.

He said: “It’s a lot. There are good days and there are bad days.

“It’s about self-care. And vulnerability is not a weakness.

“Showing vulnerability in today’s world is a strength… The more we talk about it, the more it becomes normal.”

He added: “For me meditation is key, I never thought I’d be the person to do that.

“The importance of creating a moment and taking that time in your day to just take a breath, that builds up a certain amount of resilience.”

The Sussexes have focus some of their work on promoting mental health since they stepped down as senior members of the Royal Family earlier this year.