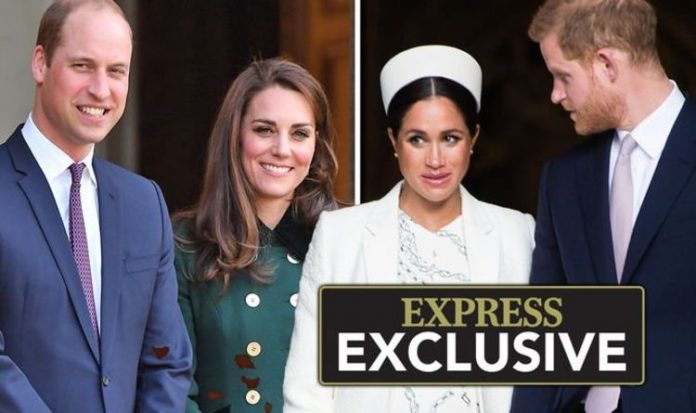 Piers Morgan made the scathing assessment of Meghan Markle in an exclusive interview with Express.co.uk, where he suggested the Duchess was miffed at the royal hierarchy. The GMB host was commenting on the reported feud between the Sussexes and the Cambridges, which he says contributed to Meghan and Harry’s decision to quit the Royal Family.

When discussing whether the fact Prince William and Kate will one day be King and Queen fed into the couple’s feud, Mr Morgan said it would certainly have been a sore subject.

Speaking to this website, the journalist said: “Well I think that has always been a running sore for Meghan Markle in particular – well why should he [Prince Harry] have to play second fiddle to these two?

“Well because William is going to be King.”

The GMB presenter then compared the differing roles the Cambridges and the Sussexes have played during the coronavirus crisis.

He heavily praised Kate and William for the numerous virtual calls and visits they carried out during the lockdown, followed by the face-to-face visits once restrictions had lifted.

But Mr Morgan did not share the same sentiments when it came to Meghan and Harry.

He said: “I think the way the Duke and Duchess of Cambridge have conducted themselves during the pandemic has been starkly at odds with the Sussexes, and to their great credit.

“They understand what do.

Again, he praised the Cambridges, alongside other senior royals, for doing their bit during the coronavirus pandemic but heavily criticised Meghan and Harry.

The GMB presenter said: “Meghan and Harry have gone to Hollywood to relaunch their careers as full-time celebrities, only to find the whole world shutting down due to coronavirus, and celebrities being displaced by health workers as stars in most people’s eyes.

“To compound their irritation, the other senior royals back home in Britain, led by the Queen, Prince Charles and Camilla, and the Cambridges, have been doing their duty in a quietly, stoically magnificent way praised the Cambridge’s for raising morale and helping support charities during the coronavirus pandemic.”

Mr Morgan has been a vocal critic of Meghan, despite the pair once being friends.

He explained the Duchess reached out to him several years ago, prompting the pair to meet up over a drink while she quizzed him for advice on handling the media amongst other things.

The journalist said he understood their relationship as a friendship, but she soon ditched him and moved on.