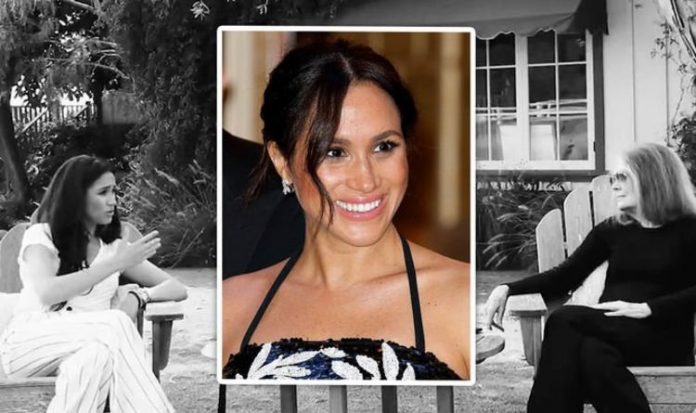 Meghan received criticism after taking part in an interview with leading feminist and author Gloria Steinem. The full Q&A will be released later today, but the brief teaser released by MAKERS, a media brand focused on the women’s movement, has already sent shockwaves through social media. On Twitter, MAKERS introduced Ms Steinem’s guest as Meghan, The Duchess of Sussex.

Their discussion, the media brand explained, focused on “representation, why each vote matters and how all women ‘are linked, not ranked’.”

However, the use of a royal title next to this statement was mocked by some Twitter users.

Twitter user Maben saw this statement as a slight against the Royal Family.

They said: “Women linked not ranked. Def a dig.

“But coming from Duchess Meghan ya gotta laugh.”

Similarly, Danielle Amelia said: “Isn’t using her title for this implying her rank though.”

And US royal fan Royal Tea added: “It’s not a great look to have the main quote from the interview be about women being ‘linked not ranked’, and be referred to by your literal rank.”

Others argued the use of the royal title undermines Meghan’s calls for equality.

“But why try talking about being equal when HRH Megs insists on using a title of hierarchy on every occasion while pretending she’s one of us.

“She doesn’t want to be equal with ANYONE”.

And social media user using the nickname Boudica added: “In that case why is Meghan using her rank? Seems hypocritical.

“Also, pure coincidence that Meghan & Gloria are signed to the same speaking agency I’m sure.”

Both Ms Steinem and the Duke and Duchess of Sussex are represented by speaking agency Harry Walker.

The New York-based agency, which also represents Barack and Michelle Obama, are helping organise upcoming events where the Sussexes will discuss issues close to their hearts, according to a source.

They told Town & Country magazine: “The conversations will relate to topics that are important in their lives — and in the world.

“Topics will largely relate to the social issues the world is facing now including racial justice and gender equity, mental health, issues impacting women and girls and the environment — as well as the intersectional nature of these issues”.

Meghan and Prince Harry officially stepped down as senior royals in late March after announcing their intention of reshaping their role within the Royal Family in January.

After discussions with the Queen during the Sandringham Summit earlier this year, the couple are retaining their full titles.

However, they can’t style themselves as HRH – His/Her Royal Highness – anymore.

This means both Harry and Meghan have the right to be called Harry, The Duke of Sussex and Meghan, The Duchess of Sussex, even while living overseas.

During her chat with Ms Steinem, Meghan says once again she is glad to be home.

Ms Steinem told her: “Meg, welcome home, I’m so glad you are home.”

The Duchess replied: “Me, too, for so many reasons. Great, fantastic.”

Meghan had already expressed her relief at being in the US after almost a decade spent abroad, first in Canada to work on legal drama Suits and later, as a member of the Royal Family, in the UK.

Appearing earlier this month on the live-streamed virtual summit organised by The 19th*, a newly-launched nonprofit news organisation, Meghan candidly said it was “good to be home”.

Speaking about the peaceful protests that started following the death of George Floyd, Meghan said: “It shifted from sadness to a feeling of absolute inspiration, because I can see that the tide is turning.”

After she was welcomed home by her guest Emily Ramshaw, Meghan added: “It’s good to be home.”