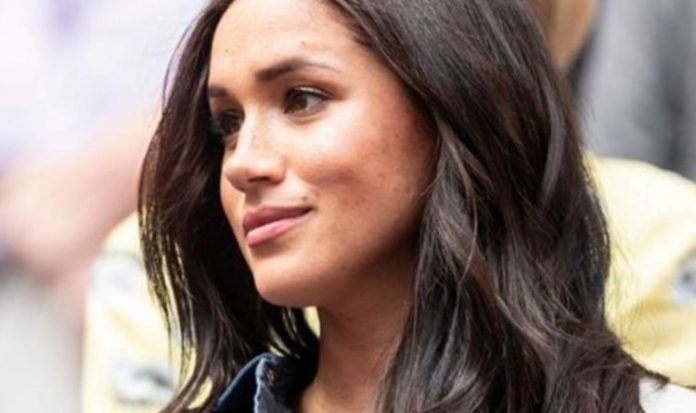 Prince Harry and the Duchess of Sussex spent two years together in Britain before their departure to North America. The Duchess’ staff now get a kick out of her mixed accent and vocabulary.

A source told the Sun: “Meghan was the all-American girl before she met Harry, but since living in the UK she’s adopted certain phrases.

“Her staff think it’s amusing to listen to an American celebrity using Britishisms.

“They do have a giggle about it and sometimes they do impressions of her but only in a light-hearted way. It’s funny to them.”

The Duke and Duchess of Sussex reportedly moved to their new mansion in Santa Barbara six weeks ago.

The staff at the Sussexes’ home “adore” Prince Harry and his accent.

The source said: “The staff there love to hear Harry’s accent, too. They adore him.

“He’s very well-mannered and staff were shocked by how down-to-earth he is as a royal.

The Duke and Duchess of Sussex purchased the $14,650,000 mansion in Montecito, Santa Barbara, according to Page Six.

Inside the home, the property includes an office, library, spa with a separate dry and wet sauna, gym, game room, wine cellar and five-car garage.

The home also has a large lot of land that contains rose gardens, century-old olive trees, tennis courts, a tea house, a swimming pool, and a children’s cottage.

The area is known for its celebrity residents with neighbours including Oprah Winfrey and Drew Barrymore.

Before moving into their new mansion, the Sussexes were living in Tyler Perry’s huge Beverly Hills Tuscan-style villa.

The Duke and Duchess decided to step down as senior royals earlier this year.

The couple continued undertaking royal duties up until the end of March.

But the Sussexes said they would carry on taking part in engagements with organisations they were already involved with such as the Invictus Games.

They originally planned to split their time evenly between the UK and North America.

But since March the couple have been living in the US with their son Archie.

The Duchess’ mum, Doria Ragland, has reportedly moved in with the Sussexes during the coronavirus pandemic to help take care of their son Archie.