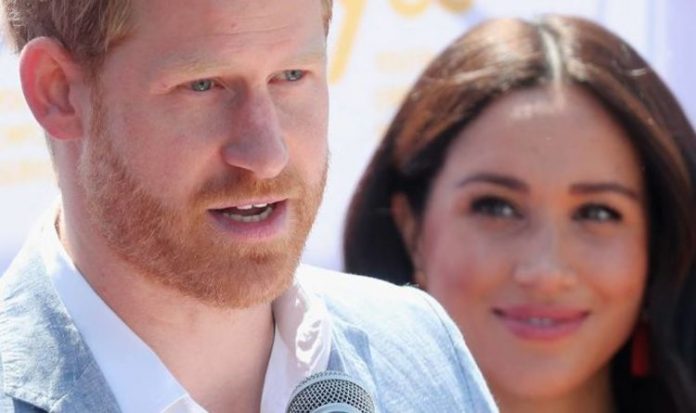 The Duke and Duchess of Sussex signed a huge deal with Spotify last year to stream their own podcasts called Archewell Audio. The deal came just months after the couple dramatically stepped down as senior members of the Royal Family to seek independence across the Atlantic. Their first show in December encouraged guests to share some of the life lessons they had learnt last year amid the devastating pandemic.

Speaking of the moment he was invited onto the episode, George told Metro: “They messaged me and said, ‘It would be really great to have you involved in this’, and they said some really kind words and things that made sense and I’ve got so much love for them.

During his appearance on the show, George said he was planning to propose to his longtime girlfriend Sandra Makumbi.

He later confirmed on Instagram that she had said yes.

Meghan reacted to the happy news on the recording, as she said that “love always wins”.

She said: “No matter what life throws at you guys, trust us when we say, love wins.”

Meghan and Harry also spoke about acts of kindness people had displayed during the pandemic during the show.

He then explained that the episode has been created to “honour the compassion and kindness that has helped so many get through it”.

The couple’s son Archie wished listeners a happy new year at the end of the show, also giving a hint that he had an American accent.

The episode ended with the gospel song “This Little Light of Mine”.

Harry said: “The message of this song is one we hold so dearly.

“It’s about using the power we each have within us to make this world a better place.

Meghan added: “It’s the music we wanted playing when we started our lives together.”

The pair will launch their series fully later this year.