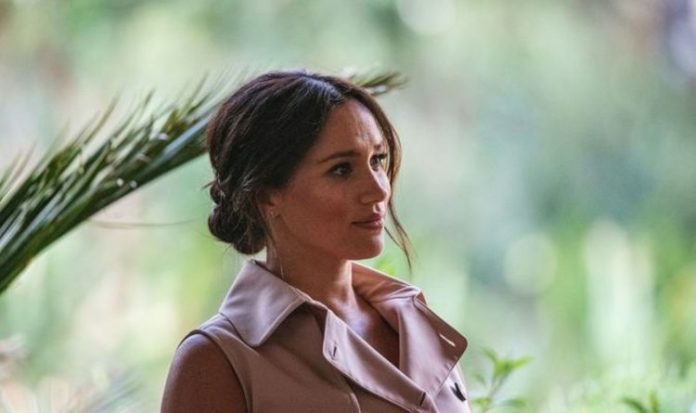 The Duchess of Sussex spoke openly to ITV’s Tom Bradby about her struggles as a royal wife and mother during a trip which was intended to draw attention to many worthy charities and groups helping people in the developing country.
But Meghan used the TV interview to speak about challenges in her own life, just a year-and-a-half into her marriage to Prince Harry.

A new book has detailed how the former actress’s outpouring of discontent suggested to palace aides she was out of touch with the realities facing the people she was visiting.
Battle of Brothers: William, Harry and the Inside Story of a Family in Tumult, written by Robert Lacey, details how royal aides reacted to Meghan’s on-screen interview.
In an excerpt published in the Daily Mail, the author wrote: “But then to start emoting against the backdrop of one of the most blighted corners of the planet to complain about the distressing problems you are experiencing adjusting to life inside a palace — Meghan’s litany of grievance had suggested indifference bordering on contempt for the true concerns of the human beings among whom she had been smiling.
“It also demonstrated a bizarre tone-deafness as to how miserably self-indulgent her self-pity must appear.

“This was unquestionably the view of a powerful constituency inside Buckingham Palace, headed by the Queen’s Private Secretary, Sir Edward Young.”

During the interview, Meghan spoke about how she was having a tough time dealing with media scrutiny.

She claimed she had not known what she was getting herself in for when she tied the knot with Harry in May 2018.

Summing up the high level of attention and scrutiny she faced from the press, the duchess said: “It’s hard.”

Meghan spent her first overseas tour as a mom visiting charities and social groups making a difference to the lives of South Africans.

She and her husband dropped in to a surf lesson run by the NGO Waves for Change.

The couple used the engagement to speak about mental health and the stigma surrounding it.

Meghan said she felt it was important to get “people to talk about it and talk to each other”.

She added: “And you see that no matter where you are in the world, if you’re in a small town or a township or if you’re in a big city, it’s that everyone is dealing with a different version of the same thing.

“Globally I think there is a bit of a consciousness crisis.”

During their tour, Harry also opened up about struggles of his own and admitted he and Prince William were on very different paths.

The new book chronicles the distancing of the two brothers, who were once famously close.