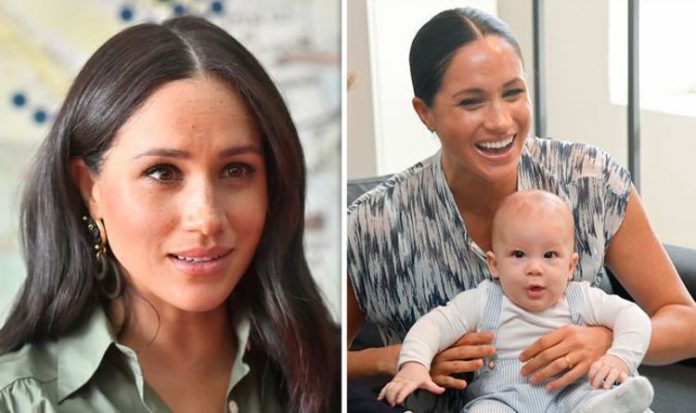 A royal dispute ensued last week after an eagle-eyed watcher spotted two changes were made to the royal baby’s documentation three weeks after it was registered.

Various theories as to why the couple might have made these changes erupted, with some claiming it was part of the Sussexes’ grand scheme to market themselves.

However, the couple quickly responded with a forthright statement, claiming the change had been enforced by the Palace.

They also took the opportunity to take another swipe at the press and their “carnival of so-called experts”, who had mused on the potential reasons for the change.

Meghan Markle’s spokesperson said: “The change of name on public documents in 2019 was dictated by the Palace, as confirmed from senior Palace officials.

They added: “To see this UK tabloid and their carnival of so-called ‘experts’ choose to deceptively whip this into a calculated family ‘snub’ and suggest that she would oddly want to be nameless on her child’s birth certificate, or any other legal document, would be laughable were it not offensive.”

Meghan and Harry with their newborn son Archie in 2019 (Image: GETTY)

However, Palace insiders reportedly hit back claiming it was simply a “clerical error” that had led to a correction.

Archie’s birth certificate was changed just weeks after he was born (Image: GETTY)

The use of phrases like “carnival of so-called experts” and “dictated to”, he argued, had made the situation worse.

He hinted that there were a lot of issues going on in the background that could perhaps be manifesting themselves in this very public disagreement.

He said: “[The Palace] were quite bemused by the tone from Meghan’s spokesman, talking about ‘a carnival of so-called experts’ called up to give their opinions and the issue was with the Palace and it had been dictated to by then ‒ and that just made it worse really.

“And I also think that there are still an awful lot of issues in the background here and things like this just make it worse, unfortunately.”

He added that the comments simply added fuel to the fire, contributing to this story escalating way beyond what a couple of words on a birth certificate would ordinarily cause.

He posited that the real reason seems to be nothing more than an admin issue, whereby Meghan needed the certificate to match her passport and other documents.

It was, therefore, put down to an “unfortunate turn of phrase” that her spokesperson’s response was so accusatory.

Mr Myers said: “The petrol was poured on the fire by Meghan’s spokesperson because they then released this statement saying that it was dictated by the Palace, they didn’t have anything to do with it, it was nothing to do with Meghan, and it was because of a set rule of protocols and that isn’t true.

“The issue was it wasn’t dictated to by Buckingham Palace because at the time they had their own team at Kensington Palace who reported into Buckingham Palace and then the Palace have essentially said it was nothing to do with them, guv.

“So, the plot thickens.

“And I think it was an unfortunate turn of phrase, if we are being kind, and certainly that is how it was described to me.

“And I don’t really understand why they had the need to make this a big, big issue and it just seems to have made the problem worse, to be honest with you.”

Ms Gripper lamented how much fuss was made over such a minor issue, branding it “silly” and insisting people need to “calm down”.