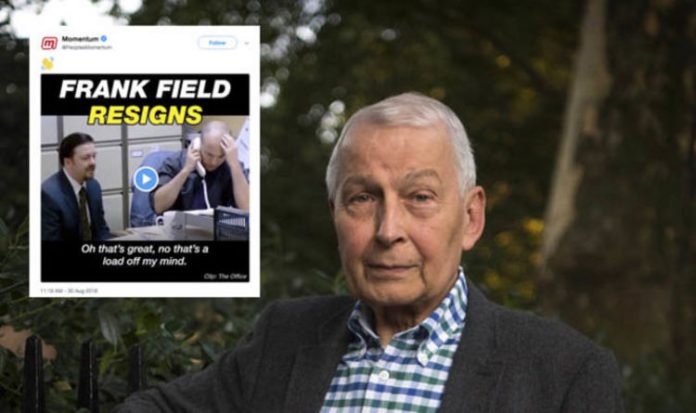 And when contacted by Express.co.uk the grassroots Jeremy Corbyn movement was defiant in its “repugnant” response to the latest in the anti-semitic scandal engulfing the party.

Mr Field, who has been the Labour MP for Birkenhead for nearly 40 years, quit yesterday saying he could no longer serve the party as Jeremy Corbyn’s leadership was causing an “erosion of our core values”.

He said the party had become “force for antisemitism”, with shame piling on Mr Corbyn who has refused to accept all the international definitions of anti-semitism into the Labour Party’s code of conduct.

Momentum yesterday shared a video clip from British comedy show The Office featuring Ricky Gervais as David Brent with subtitles “Oh that’s great, no that’s a load off my mind” and an emoji making a ‘“goodbye” gesture.

Another called Momentum a “nasty organisation”.

@TDHaynes1998 tweeted: “It’s a sad state of affairs when labour is actively pushing out MPs who did such good work, especially as chair of the DWP Committee.

“You are a nasty organisation and you’ll never get the keys to Downing Street.”

@RichardNorthey also tweeted: “What a nasty group of people you are.

“Any reasonable person who has an interest in politics respects Frank Field for his achievements and influence across the political spectrum, which will never be said about Momentum.”

@Mikey_A_J added: “wow. a labour MP resigns the whip because they are tired of the bullying and anti semitism and you are happy?”

“Momentum is truly a bigot factory or the most repugnant of creatures.”

Momentum tweeted this video from The Office (Image: TWITTER)

@st4lky tweeted: “Do you really think this reflects will on your organisation? Classless and petty.”

“Nasty little urchins like you have taken over the Labour Party and are driving it into oblivion.”

When contacted by Express.co.uk, a Momentum spokesman tried to joke about its response. He said: “It was a meme from The Office, and we apologise for any offence David Brent may have caused.”

In his resignation letter Mr Field cited two reasons why he cannot at represent the party in Parliament.

The first is the “current excuses for the Party’s toleration of antisemitism” and how Labour is “increasingly seen as a racist party”.

The second reason is the nastiness and anti-Semitism within the Labour Party including in his own constituency of Birkenhead.

Mr Field claimed bullying and intimidation were “sadly manifest within my own constituency Labour party (CLP) in Birkenhead”.

He wrote: “This is, I fear, just one example of a phenomenon that has tightened its grip on CLPs across the country and is being driven, in part, by members who in previous years would never have been able to claim Labour party membership.”

In a letter to chief whip Nick Brown, he added: “Britain fought the Second World War to banish these views from our politics, but that superhuman effort and success is now under huge and sustained internal attack.”

Mr Field intends to continue serving his constituents in Birkenhead but has resigned from the whip and will sit in parliament independently.

He has recently faced criticism from Labour Party members over his voting record on key Government Brexit legislation.

Last month he faced a vote of no confidence from his local party.

When Express.co.uk contacted the Labour Party a spokeswoman said it was not matter they would comment on.