Prime Minister Boris Johnson once again dampened First Minister Sturgeon’s hopes of independence after he reiterated her own party’s 2014 referendum mantra, that it should be a “once-in-a-generation” vote. He said the gap between the referendums on Europe – the first in 1975 and the second in 2016 – was an example of a “good sort of gap”, while speaking on the BBC’s Andrew Marr Show. Taking this as the model to aim for, it would mean Scotland should not think about calling another referendum until 2055.

Despite this, Ms Sturgeon has signalled that she plans to push on with her Scottish National Party’s (SNP) desire for an independence vote this year.

Holyrood’s spring elections take place at the beginning of May.

The SNP are thought to be keen on gauging national sentiment for independence during the ballot.

Yet even if the SNP do well, Mr Johnson is unlikely to budge, having pledged himself against any whiff of an Indyref2.

SNP: Nicola Sturgeon was accused of being too ‘fearful’ to call a unilateral referendum (Image: GETTY)

Nicola Sturgeon: The First Minister and her SNP pictured outside Westminster in 2015 (Image: GETTY)

Many, like broadcaster Tom Newton Dunn, say this leaves Ms Sturgeon with little option but something similar to a Catalonia-style illegal referendum.

Catalonia is an autonomous community in the northeastern corner of Spain which, in 2017, held a referendum that was later deemed illegal by the Spanish government.

And while this might be the only way for Ms Sturgeon to steam ahead with her independence plans, Paul Goodman, a Conservative MP for Wycombe, said the First Minister would be too scared of holding such a vote for fear it would tarnish her image in Scotland.

Writing in The Times, he said: “So if the SNP wins its majority (in May) and Mr Johnson resists another referendum, what will Ms Sturgeon do – and Alex Salmond (SNP’s former First Minister) say – then?

“She will be wary of seeking to hold a vote unilaterally, for fear that its illegality would alienate the kind of anti-Johnson but a law-abiding Scottish voters without whose support independence can’t be achieved.”

He suggested that Ms Sturgeon might go to court herself to fight Scotland’s case.

Scottish nationalist campaigner, Martin Keatings, is already pursuing a legal case which argues that the Scottish parliament has the power to stage a second referendum on its own.

Should he win the case, it could set the precedent for the SNP to hold a referendum alongside the May election.

If he loses, Mr Goodman said Ms Sturgeon might hope she would do better before the courts.

According to several polls, if an independence referendum was called today, Scotland would vote “Yes” to leaving the UK.

The 2014 referendum, granted by then Prime Minister David Cameron, was led by SNP leader Alex Salmond.

Opinion has shifted considerably since then.

Sturgeon news: She became leader of the SNP in 2014 after Alex Salmond stepped down (Image: Express Newspapers)

Steven Fielding, Professor of Political History at the University of Nottingham, told Express.co.uk: “It might be too late” to save the union.

Meanwhile, Ms Sturgeon is struggling to get a grasp on the rapidly spiralling coronavirus crisis in Scotland.

She is said to be considering more extreme measures to curb the virus’ spread.

Alex Salmond: The former First Minister was unsuccessful in his referendum bid in 2014 (Image: GETTY)

Writing on Twitter, she told Scots: “All decisions just now are tough, with tough impacts.

“Vaccines give us a way out, but this new strain makes the period between now and then the most dangerous since the start of the pandemic.” 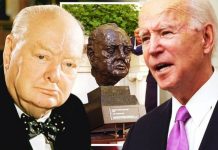