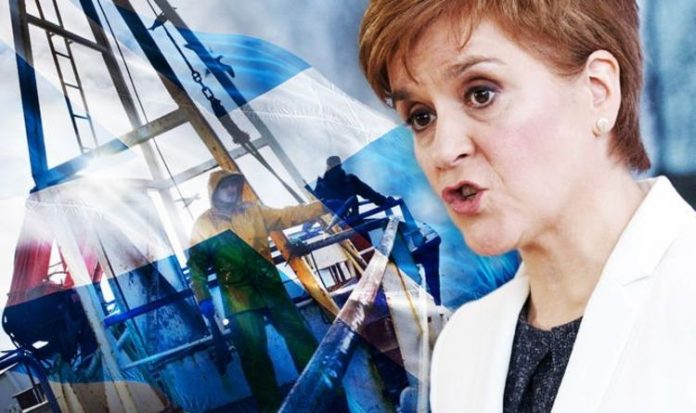 Ian Lakin, former chairman of the pro-UK Better Together campaign in Aberdeenshire, accused the Scottish First Minister of “handing back our sovereignty” to the Brussels bloc. He tweeted: “‘Thanks Nicola’: for doing nothing to support Scottish fishermen & your policy to hand back our sovereignty to the EU in an attempt to protect 17 percent of our exports and the same time turn your back on the 62 percent UK internal market and the 2.2 billion size of the Commonwealth market.”

His post was retweeted by the leader of Alliance for Unity, George Galloway, who posted: “All the numbers you need”.

Nicola Sturgeon has said she wants an independent Scotland to rejoin the European Union.

This would see Scotland’s fishing industry lose the benefits of Brexit and return under the control of the controversial Common Fisheries Policy.

It comes after Environment Secretary George Eustice said Scotland had failed to recruit a sufficient number of health inspectors to check fishing stocks after December 31.

All fish exported to the EU in the new year will need a health certificate signed off by an environmental health officer.

But Mr Eustice claimed the SNP led Scottish Government has failed to higher a sufficient number of environmental health inspectors.

Meanwhile, Ms Sturgeon has been accused of undermining the UK’s position during talks over fishing with Brussels.

The Scottish Government is said to have told the EU “both sides need to move a bit” on the contentious topic of fishing.

Brexit talks continue to falter on the issue of fishing rights.

Following their earlier call on Saturday, Prime Minister Boris Johnson and European Commission President Ursula von der Leyen acknowledged there are still “serious differences” to be resolved on fisheries and the mechanism for resolving disputes as well as competition rules.

While the two sides have been circling around the same issues for months, it is unclear whether the intervention of the leaders has created the political space for the negotiators finally to bridge the gap.

What is agreed is that time is rapidly running out.

If there is no deal by the end of the Brexit transition period at the end of the month, Britain will leave the single market and the customs union and begin trading with the EU on

World Trade Organisation terms, with the imposition of tariffs and quotas.

If a deal is agreed, then it has to be ratified by both Houses of Parliament in the UK and the European Parliament as well as signed off by the EU leaders.

There had been hopes that could happen at a two-day summit in the Belgian capital starting on Thursday – their final scheduled gathering of the year – but the timetable is looking increasingly tight.

France has publicly warned that it will veto any deal if it is unhappy with the terms, amid signs President Emmanuel Macron is anxious that Michel Barnier is preparing to give too much ground on fishing in his determination to get a deal.