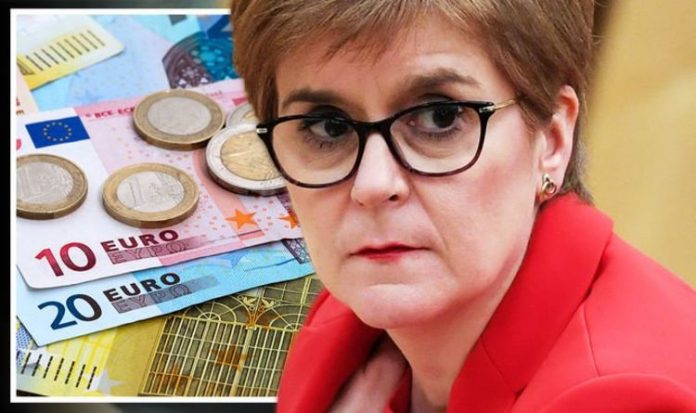 Scottish National Party (SNP) leader Nicola Sturgeon has previously ruled out Scotland joining the eurozone if it were to secede from the UK and start a new chapter in the EU. Now that the UK has left the bloc, Scottish independence would leave the country outside of both unions, leaving many to wonder what would happen to its currency. Asked last year if Scotland would change to the euro, Ms Sturgeon said: “No, I don’t think it would.” She added: “No we wouldn’t and there are examples in the European Union today that prove that’s not the case. Sweden, for example, joined the EU after the so-called requirements to join the euro were in place.”

However, while Ms Sturgeon rejected the idea of adopting the euro, one senior MEP in Brussels has predicted that the First Minister will U-turn on this issue.

Co-President of the European Greens, Phillipe Lamberts, said: “Any new member state has to adopt the euro, I know that the SNP are revisiting their scenario depending on the outcome of a referendum.

“So, I don’t think past positions of Nicola Sturgeon or the SNP are reflective of the positions they will take if they apply to join the EU after a referendum.”

This could be a stumbling block for the SNP, as highlighted by political scientist Anthony Salamone.

He wrote for the London School of Economics in November that the Scottish government would “have to reconcile current public disinterest towards the euro with the strategic consequences of remaining outside the eurozone”.

Mr Lamberts does tell Express.co.uk however that Scotland would be welcomed into the EU.

On whether an independent Scotland could join the EU, Mr Lamberts said: “Yes, the answer is a definite yes.”

He added: “There would be no obstacle for Scotland joining if the UK is no longer in the EU.

Public law expert, Professor Aileen McHarg, told Express.co.uk that Scotland faces no legal barriers, only political ones, in its attempts to join the EU.

She said: “Any barriers for Scotland in joining the EU are political rather than legal, because any candidate to join the EU has to abide by the terms set. It would be fairly easy to meet those terms because Scottish law is currently fully compliant with EU law.