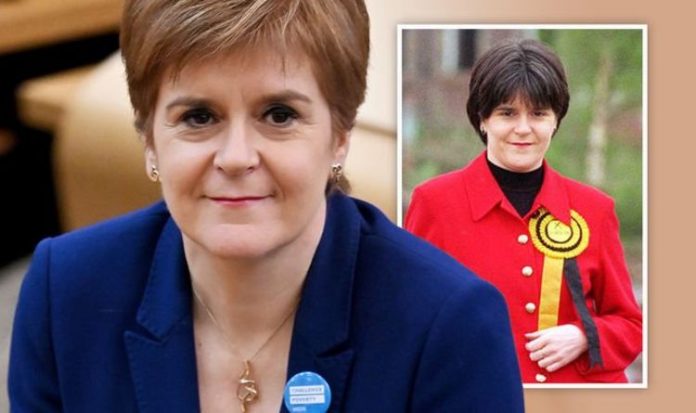 Born in the North Ayrshire town of Irvine in 1970, Ms Sturgeon became an SNP member at the tender age of 16, having been inspired by a high-ranking female politician: Margaret Thatcher. She told BBC Radio Four’s show ‘Women’s Hour’ in 2017: “Thatcher was Prime Minister, the economy wasn’t in great shape, lots of people around me were looking at a life or an immediate future of unemployment and I think that certainly gave me a strong sense of social justice and, at that stage, a strong feeling that it was wrong for Scotland to be governed by a Tory government that we hadn’t elected.” But, unlike the many who chose to support Labour – then the dominant force in Scottish politics – she was persuaded by the argument that that nation would only truly prosper with independence.

After studying law at Glasgow University and working as a solicitor at the city’s Drumchapel Law Centre, Ms Sturgeon decided to enter full-time politics at the age of 27.

Two pictures from around that period have been unearthed by Express.co.uk.

The first one shows the now Scottish First Minister standing by a capstan in 1997.

She had been selected to fight the Glasgow Govan seat for the SNP – but ended up losing to Labour.

The second image is from two years later and shows her posing with her mother, Joan Sturgeon, who was also standing as an SNP councillor.

Although she once again failed to win the seat in 1999, she was placed first in the SNP’s regional list for the Glasgow region, and was thus elected as a Member of the Scottish Parliament.

Since then, Ms Sturgeon has gone far.

She has led the SNP for less than six years, but has already fought five elections.

According to political analyst Sir John Curtice, Ms Sturgeon has “played the politics” of the pandemic more adeptly than Prime Minister Boris Johnson.

He said: “The public think that Nicola Sturgeon has handled the coronavirus crisis brilliantly, and they think Boris Johnson has done badly.