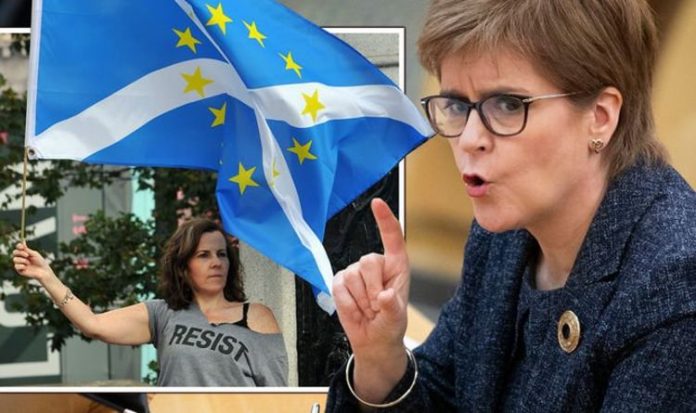 The Scottish First Minister has overseen a growth in support for secession as 20 polls in a row have put a Yes vote ahead. Nicola Sturgeon and the SNP are still trying to gain the powers to call a second vote on independence – currently a power reserved for Westminster. Debate is rife in Scotland over issues such as the economy, but the country’s entry into the EU is also a subject filled with uncertainties. Many EU figures have offered encouragement, with former European Council President Donald Tusk saying last year that Brussels was “enthusiastic” about the prospect of Scotland joining.

But Brussels may also make steep demands, and expert on Scotland-Europe relations – Kirsty Hughes – warned in an article last year that the process of joining could get “messy”.

Dr Hughes is the Director and founder of the Scottish Centre on European Relations, and she used French President Emmanuel Macron’s veto on Albania and North Macedonia joining the bloc as an example of how entry into the EU may not be plain sailing.

She said: “Although the EU accession process is clear in theory, things tend to shake out differently in practice.

“Every candidate is different and, as France has recently shown by blocking the accession of Albania and North Macedonia, politics can intrude and things can get messy.”

Dr Hughes offered the analysis in an article for Politico.

She also raised concerns over what would happen to Scotland in the transition period between leaving the UK and applying for EU membership.

This could be even more complicated if the UK has diverged significantly from EU rules post-Brexit by the time independence is secured.

Dr Hughes added: “Might Scotland effectively stay part of the future UK-EU trade deal, if there is one? Otherwise, Scotland could face trade barriers going up in all directions on its first day of independence — the opposite of a supportive European welcome.”

In a March 2020 report, Dr Hughes also noted the EU would “hold all of the cards” in negotiations with Scotland.

She said: “Accession talks are a process where the EU holds all the cards and is scrutinising each candidate, in great detail, as to whether it comes up to the mark or not.

“It is not a moment or process to ask for several or major exceptions or opt-outs, though there may be some specific issues where some transition or exception will be considered.”

But, she added that if Scotland has not diverged too much from EU rules, “it could expect an accession process that might, at the fastest, take four to five years.”

Philippe Lamberts, a senior MEP and head of the European Greens in Brussels, told Express.co.uk that Scotland would be welcome in the EU, but would have to adopt the euro.

He said in December: “Any new member state has to adopt the euro, I know that the SNP are revisiting their scenario depending on the outcome of a referendum.

“So I don’t think past positions of Nicola Sturgeon or the SNP are reflective of the positions they will take if they apply to join the EU after a referendum.”