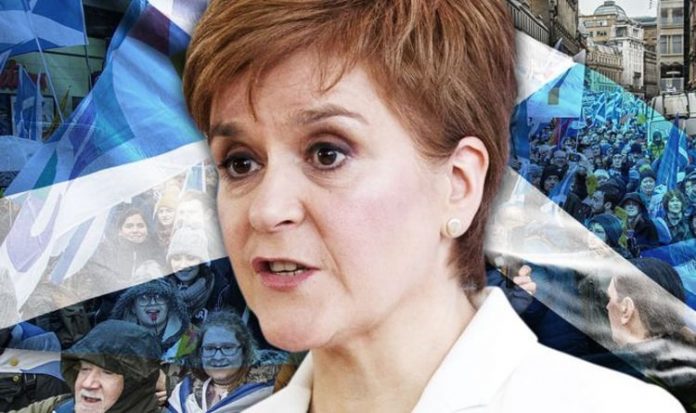 “There are both political and economic roadblocks.”

The former Brexit Party MEP highlighted why these two issues would stop any prospect of Scotland rejoining the EU if it did win independence.

She said: “I think that became obvious to Nicola Sturgeon in the very early stages when she went off to see the EU.

“Ms Sturgeon confidently thought that she could detach Scotland and it could be part the EU.

DON’T MISS: Sturgeon shut down by Michael Gove as he pinpoints flaws in attack

“The EU said no and there were two reasons for that.

“One was the economic reason, what is Scotland going to do for currency?

“The Bank of England flagged up that Scotland probably couldn’t use the pound if it were completely independent as it hasn’t got the reserves.

“The EU were very reluctant that it should use the euro, what are they going to use for currency?”

Ms Widdecombe also outlined the political difficulties Ms Sturgeon would face if she attempted to get an independent Scotland to rejoin the EU.

She said: “The second question is the political one.

Since the announcement of the Brexit result, Ms Sturgeon has argued Scotland was being pulled out of the EU against its will as more Scots voted to remain.

Ms Sturgeon has also said if Brexit could not be prevented she wanted an independent Scotland to rejoin the EU.

While on Good Morning Britian, Ms Sturgeon said: “If you look at the 27 member states of the EU, about a dozen of them are countries of similar size to or smaller than Scotland.

“So, it’s perfectly normal to be a small independent country in the EU.

“When I travel across Europe there’s a real sympathy for the position Scotland finds itself in possibility being taken out of the EU against our will.”

Panelbase found that support for Scottish independence now stands at 54 percent compared with 46 percent support for the Union.