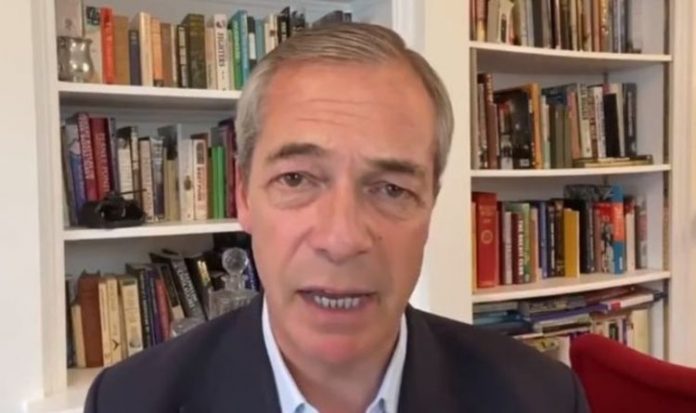 Mr Farage called for university students to be given a 30 percent discount on their tuition fees during the pandemic, as they have been “imprisoned” in student accommodation. The former Brexit Party leader tweeted: “Young people are getting ripped off by this lockdown. It has left students virtually imprisoned whilst paying thousands in fees.”

In a video that accompanied his tweet, Mr Farage said: “Just spare a thought for the younger generation.

“The ones for example who went to university in September, first year of university, they are being charged fees of £9,000 a year with 6 percent interest charges.

“What has happened? Well, the lessons have stopped, they are told they can’t leave the halls of residence, can’t socialise with the people next to them.

READ: Donald Trump: How many US presidents have served one term?

“There are Covid marshalls coming around making sure they are on their own in their room, not playing music too loudly.”

He continued: “We have virtually imprisoned these people at university.

“I can imagine that if I was 19 years old, I had gone to university, I had been there two months and I was stuck in something like a prison, I would be pretty upset.

“I think the least we can do is say to our ripped off students that they are going to get a 30 percent reduction in their fees.

Welsh Education Minister Kirsty Williams on the decision: “The well-being of learners and ensuring fairness across the system is central in our decision-making process.

“In line with the recommendations of both Qualifications Wales and the Independent Review, there will be no exams for GCSE or AS level learners next year.

“A-level students will also not be required to sit exams.

“We remain optimistic that the public health situation will improve, but the primary reason for my decision is down to fairness; the time learners will spend in schools and colleges will vary hugely and, in this situation, it is impossible to guarantee a level playing field for exams to take place.”