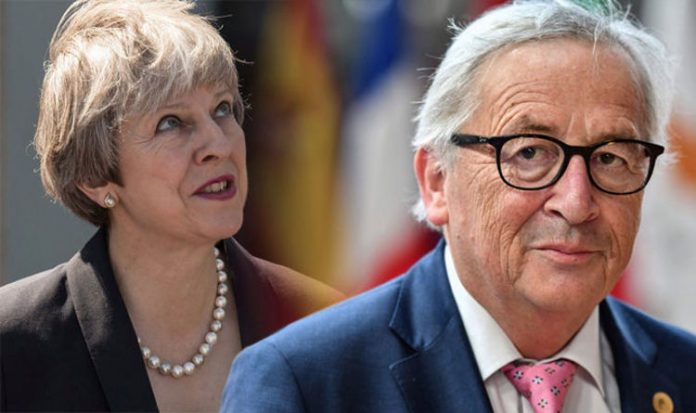 An EU prime minister sitting around the summit table said he was alarmed by the tone of Theresa May’s words on Brexit, an official he briefed on the discussion told Bloomberg.

He left the meeting thinking the risk of a “no deal” Brexit had increased from about 20 percent to nearly 50 percent, the official said.

The EU prime minister is said to have been alarmed by Mrs May’s suggestion there was a real possibility of the talks collapsing.

The EU leader’s comments have been echoed by former Swedish Prime Minister Carl Bildt who also argued “the risk is increasing”.

Speaking on Sky News, Mr Bildt told host Adam Boulton that the lack of progress in negotiations between the UK and European Union meant the likelihood of a no-deal scenario is increasing by the day.

He said: “A couple of months ago I would have said I would consider the risk of that very low.

“As things are now progressing without much happening, I have to say that the risk is increasing.

“I still refuse to believe that stupidity would go to those lengths, that it will happen.

“But unfortunately it can’t be excluded.”

The news comes after EU leaders signed off Brexit talks with minutes during the second day of the EU summit on Friday, saying no substantial progress had been made.

The EU Summit conclusions read: “Work must also be accelerated with a view to preparing a political declaration on the framework for the future relationship.

“This requires further clarity as well as realistic and workable proposals from the UK as regards its position on the future relationship.”

It also urged EU members to prepare for a ‘no deal’ scenario, saying: “The European council renews its call upon member states, union institutions and all stakeholders to step up their work on preparedness at all levels and for all outcomes”.

Initial reports suggested the Brexit debate lasted only five minutes compared to the ten hours on migration, however, German Chancellor Angela Merkel insisted it was at least 15 minutes when asked at a post-summit press conference.

Mrs Merkel said: “What you say is not correct on Brexit. We talked for a quarter of an hour with Theresa May about this.

“But she wanted this – because only in the next few days she will table the white paper.

“By October we have to have an idea about the future relationship and we have no real solution as yet for the Irish border issue.”