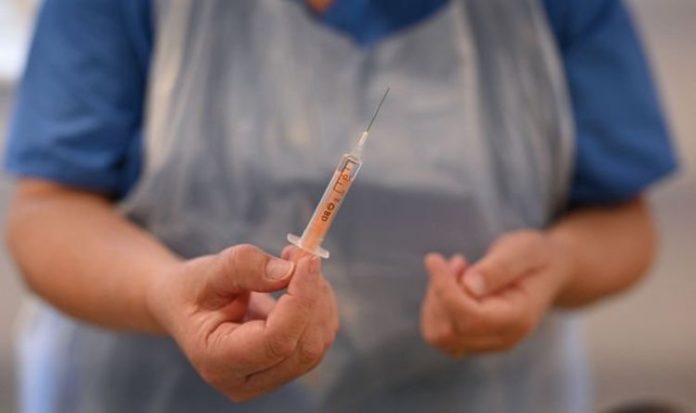 Dr Maheshi Ramasamy, a principal investigator at the Oxford Vaccine Group, said those wanting the British jab over others had the wrong attitude – and revealed she has had the Pfizer/BioNTech inoculation. She told the Daily Express: “I was on the wards in December and I was seeing dozens of Covid patients a day, and the Pfizer vaccine was obviously released first and that was what was offered to me.

“I felt a little bit disloyal because obviously I would have loved to have had the Oxford vaccine, but rationally the right thing to do was to have the first vaccine that was offered to me, to protect my health, my family and my patients.”

The UK has so far approved three coronavirus vaccines for emergency use following months of rapid but rigorous testing.

Pfizer’s was rolled out in early December, closely followed by the Oxford University one, and deliveries of Moderna’s are due in the spring.

Dr Ramasamy, who helped run clinical trials and monitor the safety of volunteers, said: “I’ve had a few people say to me ‘I’m only going to have the Oxford vaccine because it’s British’, and that’s not the right attitude.

“Both vaccines are safe and effective and both have been recommended by the JCVI. What determines which vaccine you have is actually just logistics.

The UK has so far approved three coronavirus vaccines for emergency use (Image: Getty )

However, the hardworking medic admitted she was a little jealous that her father will be getting the Oxford  jab next week. She joked: “I’m very pleased that he’s having the one that he’s being offered but it’s like ‘damn it, I wanted it!’.”

Dr Amy Flaxman has worked at Oxford’s Jenner Institute for seven years and joined the Covid vaccine project in March to help with lab testing of blood samples during the trials.

She has not been offered the jab yet as her role is not patient-facing but will happily take whichever is available.

She said: “I’ve had feedback from friends and family in the NHS and so on, who said: ‘I was going to have your vaccine and now they’ve given me the Pfizer one’.

“But I’m like: ‘I don’t mind. You’re getting a vaccine, that’s fantastic news!”

The Oxford team, led by Professor Sarah Gilbert, began designing their jab as soon as the genetic code of the coronavirus was published by Chinese scientists on January 11.

They had been working on a new vaccine “platform” called ChAdOx1 for around a decade, while keeping an eye out for emerging pathogens with pandemic potential.

The viral vector platform uses a common cold virus that infects chimpanzees – modified so it cannot cause infection in humans – as a backbone to create a vaccine against almost anything.

All the team had to do was insert the genetic sequence of the coronavirus’s spike protein.

When the vaccine enters the body, it uses this blueprint to produce the spike protein, provoking an immune response and teaching the body to recognise and attack the coronavirus if it encounters it in future.

Dr Flaxman said the team was able to respond so quickly because much of the groundwork had already been laid.

“Other clinical trials and a lot of preclinical work has been done with this viral vector backbone, albeit across different disease areas,” she said.

“So we have Malaria, we have Ebola, we have MERS – things I’ve worked on before that have all been in this ChAdOx1 backbone.”

Following lab and animal testing, more than 23,000 volunteers were recruited for human studies in the UK, Brazil and South Africa. Half received the Oxford vaccine, while the rest got a placebo jab.

Some 237 Covid-19 vaccines are currently listed as in development across the globe by the World Health Organisation.

It is tempting to see the researchers as competitors, racing to be the first to get jabs into arms and end the pandemic.

But when Pfizer became the first to report phase three results on November 9, Dr Flaxman and her colleagues were delighted.

She said: “It’s encouraging when you find out that someone else’s vaccine is working. You think: ‘Ok good, theirs is working, hopefully ours will too’.

Boris Johnson visits a laboratory where bathes of the Oxford vaccine are tested (Image: Getty)

“Although it was obviously a different platform technology, it was still encouraging.”

Dr Ramasamy added: “It’s been so miserable in the UK, we’ve all had such a difficult year, emotionally, personally, and we just needed an effective and safe vaccine.

“While it would have been nice to have had our vaccine out first, the most important thing was that we had a vaccine and we got going.”

The Oxford team soon followed suit, publishing their results showing an average efficacy of 70 per cent on November 23.

As a consultant at John Radcliffe Hospital, Dr Ramasamy has seen firsthand the strain on the NHS as it deals with the greatest challenge in its 72-year history.

She said: “We’ve seen over double the numbers that we saw during the first surge at my hospital and that’s similar across the country.

Some 237 Covid-19 vaccine are currently listed as in development across the globe (Image: Getty)

Some things are better in this wave, Dr Ramasamy said. Drugs such as dexamethasone can cut the death risk for the sickest patients and doctors have a better understanding of which patients will benefit from ventilation.

“But the sheer numbers that have come in have been what’s been overwhelming this time around,” she added.

“The inability to deliver normal NHS care, so things like cancer operations or even elective procedures like bypasses or hip operations which really impact on quality of life.

“There will be people who will have poorer outcomes medically because they couldn’t be seen now because their clinics or their operations were pushed back, and that feels really frustrating.”

The work is far from over and the scientists will continue analysing data from trial participants for a year after their booster vaccine.

They are also busy assessing the impact of new variants and preparing for rapid development of adjusted Covid-19 vaccines, should it prove necessary.

Dr Flaxman said: “We wouldn’t be completely starting from scratch, we’ve got the infrastructures in place. In terms of technically what you have to do it’s quite straightforward.”

Much is still uncertain – whether we will need annual Covid-19 jabs, whether new variants will cause problems – but whatever happens, the UK can be proud to have some of the world’s top scientists, who have truly created a vaccine for the world.

Dr Ramasamy added: “The vaccine will take time [to have an effect on infection rates], but I really hope that that will be the thing that protects us from having a third or fourth surge.”