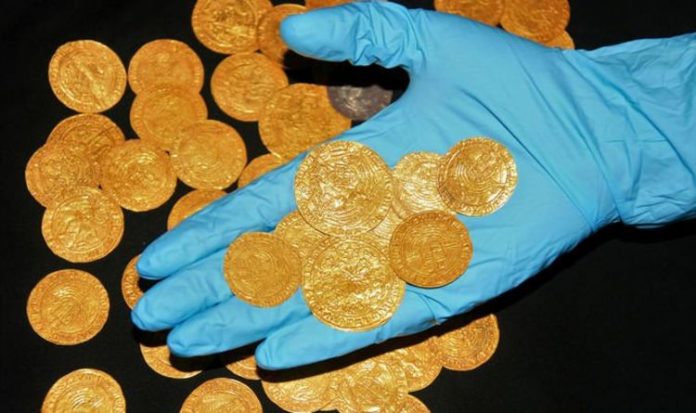 One couple dug up 60 gold Tudor coins as they weeded a flowerbed. And a mystery hoard of 50 gold South African Krugerrands from the 1970s, worth about £75,000, were also discovered in a back garden. The British Museum say there have been more than 47,000 treasures unearthed so far this year. Other finds include a “unique” copper-alloy Roman furniture fitting dating from AD 43 to 200.

It is decorated with the “remarkably well-preserved” face of the Titan god of all fresh water Oceanus.

Intricate seaweed fronds frame his face, beard and moustache, while tiny dolphins swim down from his ears towards his chin.

A seal matrix of David, Bishop of St Andrews, who was in office between 1239 and 1253 was also found.

It shows him standing in his vestments with a crozier in his left hand and carries the Latin inscription: “David, God’s messenger, bishop of St Andrews”.

They include four coins from Henry VIII’s reign and feature the initials of his wives Catherine of Aragon, Anne Boleyn and Jane Seymour.

One theory is that the coins were hidden by a wealthy merchant or members of the clergy who feared losing them to Henry VIII during the Dissolution of the Monasteries.

The British Museum said that before this year’s discoveries 81,602 finds were recorded in 2019, mainly by metal detectorists, an increase of more than 10,000 on the previous year.

Its Portable Antiquities Scheme has been helped by people submitting digital records.

A spokesman said: “The pandemic has seen a boost in finds from back gardens recorded. This has included some very special and intriguing discoveries.”