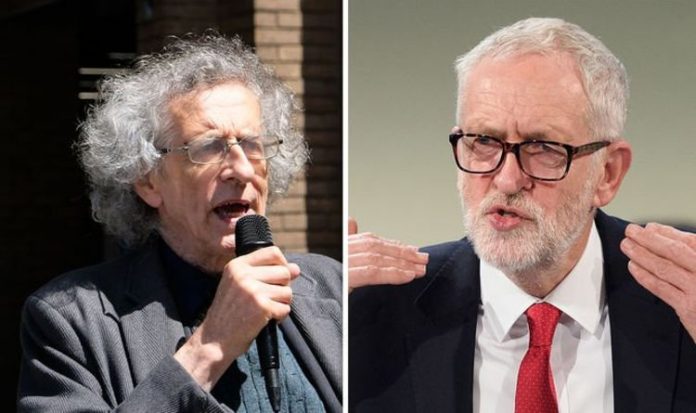 Piers Corbyn has become a controversial figure as a result of his protests in London in recent months, culminating in a fine last week. He was slapped with a £10,000 fixed penalty under new coronavirus laws restricting public gatherings of more than 30 people. He was arrested and fined for his part in organising Saturday’s march against lockdown restrictions. This came after he was also charged in June for two counts of breaching lockdown restrictions at marches against 5G in May.

Piers Corbyn advocated for conspiracy theories related to coronavirus and 5G as well as anti vaccination theories before police took him away.

While attracting controversy in recent years, he has also been outspoken on Brexit.

This led Piers to hit out at his brother Jeremy Corbyn.

Last September, the Labour Party leader criticised the idea of a no deal Brexit and argued for a delay of the withdrawal.

But Piers is an advocate for a no deal ‘WTO’ Brexit, and launched a scathing assault on his own brother’s policy.

He wrote on Twitter: “What the ** are labour playing at? One clause in Benn’s bill means that we can only leave EU if EU agree. 5milllion leavers voted labour at last election I don’t think they’ll vote labour next time, so much for labour respecting the result of 2016 ref’.”

He also described Labour’s campaign against no deal as “a cover to trash the historic democratic mandate to leave” and described its backers as “enemies of the people”.

Piers has also shared graphics and videos saying his brother had broken promises not to block Brexit, suggesting that he’s part of a “shameless Europhile Parliament”.

Although Jeremy Corbyn has been a life-long critic of the EU he campaigned for Remain in the 2016 referendum.

The party’s leader at the time, Vince Cable, said he was “pleasantly surprised” by his party’s “very good result”.

He added that there was “a majority of people in the country who don’t want to leave the European Union now”.

This appeared to provoke Labour’s shift to a more Remain friendly position, but would ultimately cost the party in December’s election.

The party lost Brexit supporting seats in Wales, the North and Midlands as Labour slumped to their worst result since 1935.