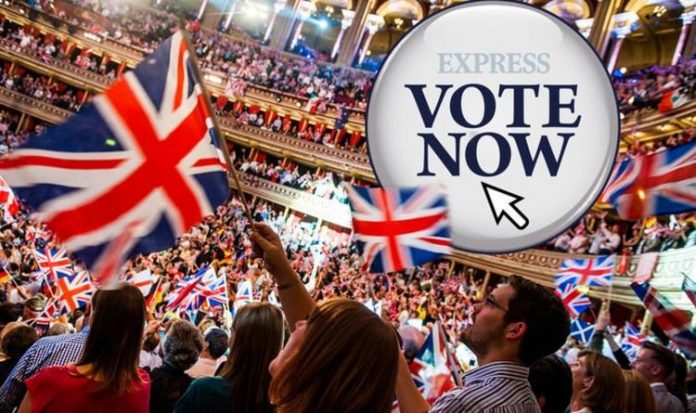 The event – scheduled for September 12 – marks the finale of a world-famous music festival lasting almost two months. Organisers have been forced to scale it back dramatically as a result of the coronavirus pandemic – and the last night, which marks the Proms’ 125th anniversary, will be performed at a near-empty Albert Hall, with a much smaller orchestra for reasons of social distancing.

Both tunes have been criticised for being out of place in the modern era, with Rule Britannia including the line “Britons never will be slaves”.

Conductor Dalia Stasevska, from Finland, has hinted they could be dropping, suggesting a “ceremony without an audience is the perfect moment to bring change”.

Her comments provoked a sharp rebuke from Brexit Party leader Nigel Farage, who tweeted: “So the BBC may drop Rule Britannia and Land of Hope and Glory from The Proms because the Finnish conductor is too woke. Why not drop her instead?”

The Defund the BBC campaign also hit out, posting: “If the BBC do go ahead with stripping the last night of the Proms of patriotic songs #DefundTheBBC will organise a mass defund in retaliation.”

Should Land of Hope and Glory and Rule Britannia be cut from the schedule? (Image: GETTY)

Campaigners accused the corporation of “using every licence fee payer funded opportunity to signal its disdain for the British people”.

Defund the BBC supporter Calvin Robinson tweeted: “Why is the BBC pandering to hard-left extremists?

“Last Night of the Proms is a British institution. It’s one of the rare occasions we still expect a little patriotism; That’s not a bad thing, our Britishness is something that unites us! #DontDivideUs #DefundTheBBC”

Black Lives Matter protests were witnessed across the globe after harrowing footage emerged of African American George Floyd pleading for his life as a police officer knelt on his neck.

READ MORE: Brexit boost: UK has advantage over EU on world stage for THIS reason

Composer Dalia Stasevska has hinted the tunes may be dropped (Image: Twitter)

In the UK, demonstrators targeted several statues associated with the nation’s colonial past, including a statue of slave trader Edward Colston, which was dragged from its plinth and thrown into Bristol harbour.

Sir Winston Churchill’s statue in Parliament Square had to be boarded up after it was defaced with the word “was a racist” scrawled on it.

Furthermore, in June it was reported the Rugby Football Union was considering banning Swing Low, Sweet Chariot, which is frequently sung by England fans during the six-nations, because of its links to the slave trade.

The song was reportedly written by Wallace Willis, who was a Native American slave in the Deep South prior to the American Civil War.

Rule Britannia, meanwhile, is based on a poem by James Thomson and was set to music by Thomas Arne in 1740.

Land of Hope and Glory, with lyrics by AC Benson, features music by Edward Elgar.

Jan Younghusband, head of BBC music TV commissioning, said: “We have a lot of problems about how many instruments we can have.

“It is hard to know whether it is physically possible to do [Rule, Britannia].

“Some of the traditional tunes, like Jerusalem, are easier to perform.

“We also don’t know if we’ll be in a worse situation in two weeks’ time.”

Rule, Britannia originates from a poem by James Thomson and became symbolic with the British Empire and Navy in 1745.

Unlike most years, this year’s Last Night of the Proms will happen in an empty Royal Albert Hall (Image: GETTY)

BBC columnist Richard Morrison last month demanded they be cut from the schedule, describing them as “crudely jingoistic” and examples of a “toe-curling embarrassing anachronistic farrago of nationalistic songs”.

BBC Proms director David Pickard said: “These are challenging times for our nation and the rest of the world, but they show that we need music and the creative industries more than ever.

“We will provide a stimulating and enriching musical summer for both loyal Proms audiences and people discovering the riches we have to offer for the first time.”