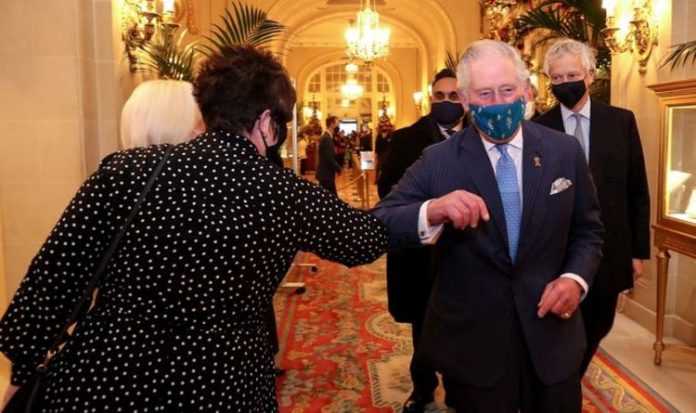 The alleged royal gatecrash was part of a tour of London’s famous Ritz Hotel that Prince Charles and his wife Camilla, Duchess of Cornwall, were on. At the hotel, he chatted to the staff who run it and voiced his concerns about the hospitality industry amid the coronavirus pandemic.

While on the tour, the Prince appeared to get sidetracked by a group of women celebrating a 50th birthday.

Elbow-bumping has often been used throughout the Covid-19 pandemic a socially-distant alternative to traditional physical greetings such as a handshake.

Elsewhere on the tour, the heir to the throne met up with restaurant teams, housemaids and other staff.

He told the hospitality workers: “I have been so worried about the devastation being caused by this pandemic. We really are so glad you are getting back to businesses.”

In the restaurant, the Prince reportedly commented on the importance of sustainably-sourced food, and was given assurances by staff.

Upon leaving, he wished everyone a “happy Christmas and a better New Year”.

The tour was not the first time Prince Charles has visited the famous London establishment.

It was there than he and Camilla made their relationship public in 1999 with a photograph.

Around three years later, he issued a royal warrant to the hotel’s catering service.

A warrant aims to recognise any group or individual who supplies goods or services to either Queen Elizabeth II, Prince Philip, Prince Charles or their households.

According to the Royal Family’s website, there are 816 Royal Warrant holders in total.

Recipients can be one person or an entire global company, and differ broadly in the services they have provided.

The website adds: “The grant of a Royal Warrant gives a Warrant Holder nothing more than a right to display the Royal Arms and they are not entitled to claim or imply any exclusivity of supply.”

Prince Charles and the Duchess of Cornwall are not the only royals to have embarked on official engagements this week.

Prince William and Kate Middleton set off on a three-day train tour of the country last Sunday in which they spoke to a variety of people to recognise their Covid-19 pandemic efforts.

The journey is thought to have marked Kate’s first official time on the royal train, which observers have noted comes with an eye-watering running cost.