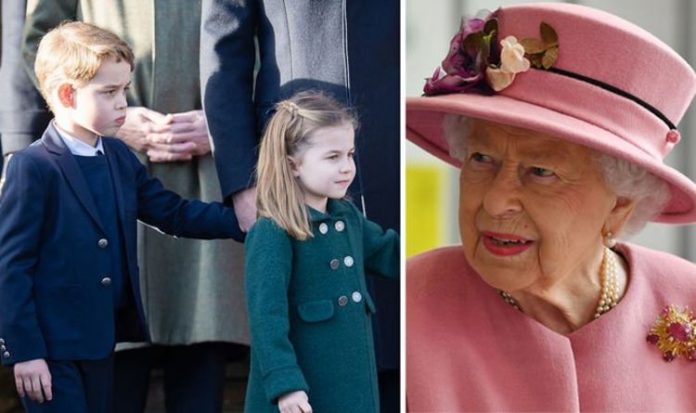 Kate, Duchess of Cambridge, 38, and Prince William, 38, are expected to leave London with their children – Prince George, seven, Princess Charlotte, five, and Prince Louis, two, and travel to Anmer Hall home in Norfolk for the Christmas holidays. Anmer Hall is just up the road from Sandringham House where Queen Elizabeth II, 94, and Prince Philip, 99, usually welcome Royal Family members over the festive period. However, this year the traditional gathering is likely to be cancelled amid the coronavirus pandemic and the Cambridge children could miss out on a treasured reunion with their great-grandparents.

The Queen is currently carrying out royal duty from the safety of Windsor Castle while Prince Philip has remained at Wood Farm in Sandringham where he has been based since his retirement.

As for Britons everywhere, the Royal Family’s Christmas plans will have to be dramatically altered to bring them into line with Government COVID-19 guidelines.

The rule of six ban on socialising means the Queen and the Duke will be unable to host more than four people at a time while at Sandringham House this Christmas.

Prince William, Kate and their three children are highly unlikely to join the Queen and the Duke for Christmas lunch for several reasons.

Firstly as the Cambridges are a family of five they are unable to socialise with more than one other person at a time.

This means that Kate and William may have to take it in turns to visit the Queen and Philip with their children over the Christmas holidays.

Kate and William returned to London with their little ones for the start of the autumn term.

Prince George and Charlotte are both pupils at Thomas’s Battersea, a short drive from the Cambridges London base, Kensington Palace.

Following the service, Wills and Kate did a walk around with their children to meet royal fans gathered outside the church.

Outgoing Charlotte melted hearts by hugging one fan who gifted her an inflatable flamingo toy.

The Christmas church trip is another royal tradition expected to be struck off this year.

Since lockdown ended royal engagements have ceased to be announced ahead of time in order to prevent crowds of royal fans from gathering.

Who will the Queen spend Christmas with?

The Queen faces a difficult choice over which family members to spend Christmas Day with.

Her youngest son Prince Edward, his with Sophie, Countess of Wessex and their two children – Lady Louise Windsor and James, Viscount Severn could be a likely choice.

Not only are the Wessexes royal favourites, but the family of four could visit the Queen and Philip without it being a breach of the rule of six.