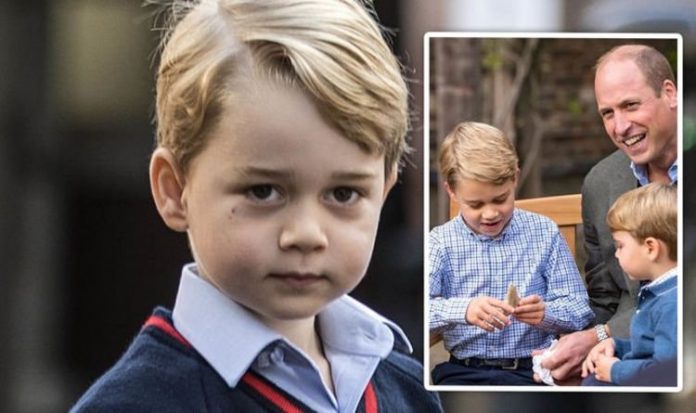 The UK’s leading naturalist Sir David delighted Prince George by giving him the ancient tooth of a giant shark, the scientific name of which is carcharocles megalodon, during a recent visit to Kensington Palace. Sir David revealed he found this fossil by chance during a holiday to Malta in the late 1960s.

But the seven-year-old heir to the throne may be left spending little time with his unique present as an official in Valletta has pledged to “set the ball rolling” to get the shark tooth back.

Maltese Culture Minister Jose Herrera told The Times of Malta: “There are some artefacts that are important to Maltese natural heritage and which ended up abroad and deserve to be retrieved.”

Without providing details of how he intended to recover the tooth, Mr Herrera hinted at a change of pace on the attention given by his country to natural history.

He said: “We rightly give a lot of attention to historical and artistic artefacts.

The tooth, which once belonged to an extinct species of giant shark able to grow up to 16 metres, is believed to be 23-million-year-old.

Speaking about the precious present given to Prince George, Kensington Palace wrote on Instagram on Saturday: “Sir David found the tooth on a family holiday to Malta in the late 1960s, embedded in the island’s soft yellow limestone which was laid down during the Miocene period some 23 million years ago.”

The Cambridges’ three children are all fans of the naturalist’s popular TV shows, according to Kate, Duchess of Cambridge.

Speaking at a previous event to Sir David, Kate said: “The children were very upset that we were coming to see you and they weren’t coming, they’re massive fans of yours.”

This was confirmed by a palace aide who speaking about the encounter said: “The children are massive fans of Sir David and this was the first time they had met him, although they have always wanted to.

“So they were absolutely delighted, and you can see from Charlotte’s reaction in the picture how excited she was.

“They were fascinated by the shark tooth and Sir David explained how he had found it, how old it was and how it had been preserved in Malta’s soft yellow limestone.”

Sir David visited the Cambridges at their London residence earlier this month to attend an outdoor screening of the naturalist’s latest film – David Attenborough: A Life On Our Planet.

According to the palace aide, Prince William was left stunned by Sir David’s latest work.

They said: “The Duke thought it was Sir David’s best documentary yet.

“It is a terrifying look at what we’ve done to the planet and where we are today, but it also offers hope and cause for optimism because if we can act now, and act together, we can turn things around.”

The Duke of Cambridge and Sir David share the goal of protecting the natural world and have been working together on a few projects.

Among them, there is The Earthshot Prize – an ambitious set of challenges aiming to inspire new ways of thinking, technologies and solutions to preserve the planet.

Prince William has also been the royal patron of Tusk since 2005, a charity aiming to protect wildlife in Africa from extinction and poaching.