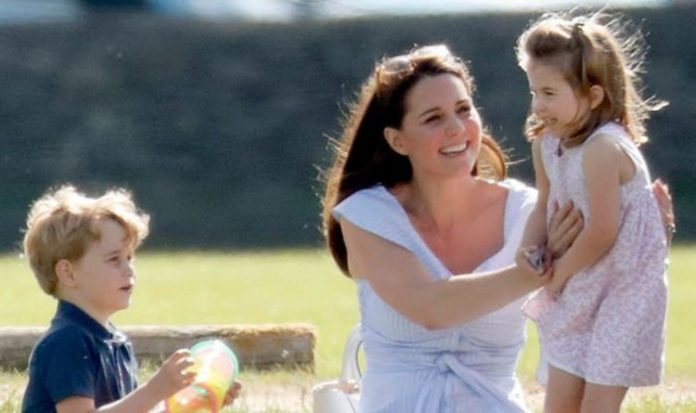 The decade-long research and background work carried out by Kate is having an impact on how she is homeschooling her children, according to royal expert Katie Nicholl. The Duchess of Cambridge is making sure there is a balance between screen time and outdoor activities in her children’s lives, the expert said.

Ms Nicholl told OK! magazine: “Kate has been interested in how outdoor learning can benefit children.

“She got to meet children who had lessons outside and ask how they enjoyed it. She saw the benefit first-hand.

“Kate is aware of screen time and tries to limit the children being exposed to too much.

“When the children have a break, she takes them outside, come rain or shine.

“She wants them to get fresh air and be in nature.

“She loves to pick vegetables with them in the gardens.

“If they are learning about rivers or the sea, she and William try to incorporate that into their walks.”

Kate has been a vocal advocate for years of the benefits of spending time outdoors – especially when it comes to children’s development and wellbeing.

Taking part in the CBBC flagship show Blue Peter during the summer of 2019, Kate revealed she “drags outside” her children no matter the weather.

“It encourages creativity, confidence and even a short amount of time – 10 or 15 minutes – makes a huge difference to physical wellbeing but also to our mental wellbeing.”

Kate has been working on issues surrounding the early years, children’s development and mental wellbeing since she joined the Royal Family, taking on patronages focused on these issues.

In the spring of 2018, when she was pregnant with Prince Louis, she launched a steering group focused on this topic.

Last year, she officially launched her Early Years work in January with the creation of a nationwide survey investigating what Britain thinks about the crucial first five years in the life of children, how they impact adulthood and what can be done to give children their best possible start in life.

Prince George, Charlotte, Louis and their parents taking part in the clap for our carers initiative (Image: GETTY)

The results of this poll were combined with experts’ opinions, observational research and in-depth interviews with parents and showcased in November 2020 during the virtual forum on the Early Years hosted by Kate and William’s Royal Foundation.

Kate made it clear she did not become interested in the development of children after becoming a mother and she doesn’t think this is an issue concerning only parents.

In the key statement delivered during the forum, she said: “People often ask why I care so passionately about the early years.

“Many mistakenly believe that my interest stems from having children of my own.

“While, of course, I care hugely about their start in life, this ultimately sells the issue short.

“Parenthood isn’t a prerequisite for understanding the importance of the early years.

Prince George is third-in-line to the throne (Image: EXPRESS)

“If we only expect people to take an interest when they have children, we are not only too late for them, we are underestimating the huge role others can play in shaping our most formative years too.”

She added: “Early years are not about how we raise our children but how we raise generations of adults, which is why I wanted to start a conversation.”

Much like during the first national lockdown, Kate, Prince William and their three children are staying at Anmer Hall, their home in Sandringham.

While in Norfolk, Prince George and Princess Charlotte are being homeschooled.

Prince George, Charlotte and Louis arriving at the London Palladium with Kate and William in December 2020 (Image: GETTY)

Last spring, Kate revealed her children’s different workload and homework had been a difficult pill to swallow for Prince George.

Speaking to ITV’s This Morning, Kate was asked about the challenges presented by homeschooling.

“Actually, George gets very upset because he just wants to do all of Charlotte’s projects.

“Like making sort of spider sandwiches is far cooler than doing literacy work.”