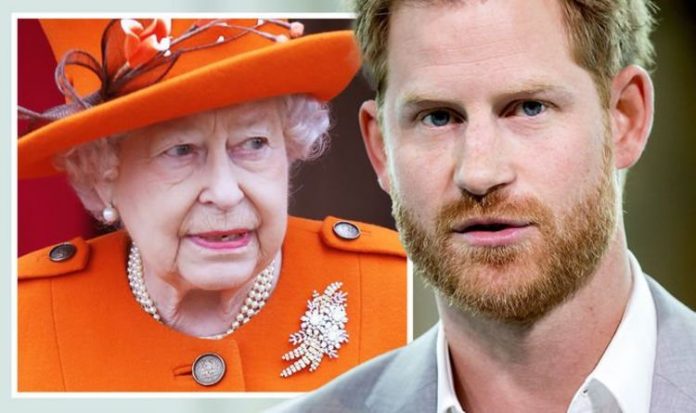 The Duke and Duchess of Sussex have faced fresh calls to have their royal titles axed in light of the news regarding their upcoming interview with US TV legend Oprah Winfrey. Meghan Markle and Harry were told not to use their HRH status when they stepped down, but keep the title on official documents and also maintain their Duke and Duchess titles. However, they have been hammered with yet more criticism after their interview announcement, with Good Morning Britain host Piers Morgan calling for their titles to be stripped.

He said: “Take away all their titles, Your Majesty.

“The British people are totally behind you against these shameless grifters.”

He added: “People who really want to be private don’t release intimate baby bump snaps to the same papers they profess to despise.

“Then announce they’re doing a 90-minute special with Oprah.”

Prince Harry could still wield the Queen’s powers as a Counsellor of State (Image: GETTY)

“It is always best not to slam the door shut. I believe the Queen deserves more respect.”

However, the debate over Harry’s royal titles has neglected one important aspect, which is that he is still a Counsellor of State, meaning he can essentially deputise for the Queen in certain circumstances.

Being a Counsellor of State means he can act as part of a group of five senior royals to wield the powers of the monarch if she were to become incapacitated.

Prince Philip and Prince Charles are two of the Queen’s Counsellors of State (Image: GETTY)

This role is therefore completely hereditary, with Harry replacing Prince Edward when he reached the age of 21.

Edward himself had ousted the Queen’s sister Princess Margaret from the position.

Meanwhile, Harry and Andrew are destined to be replaced by William’s children when they come of age.

This means that, for now, if Her Majesty were to become temporarily incapacitated, Harry still has the right to become a Counsellor of State, despite stepping down as a senior royal.

The Cabinet Manual, published in October 2011 is “a guide to laws, conventions and rules on the operation of government”.

The guidelines set out what happens if the Queen should become unwell or otherwise unable to fulfil her duties as monarch.

A Regency is established if the sovereign becomes incapacitated for a long period of time, but there are a different set of rules for if the Queen is just temporarily debilitated.

The guidelines state: “When the sovereign is absent from the country for a short period or temporarily incapacitated or for some definite cause not available, his or her functions are delegated to Counsellors of State.

“These are currently the sovereign’s spouse and the four nearest in line to the throne.

“Two or more Counsellors of State may exercise any of the functions of the sovereign except the powers to grant any rank, title or dignity of the peerage, or to signify royal assent to any amendment to the Act of Settlement 1700 or royal style and titles.”

The Queen can delegate to the Counsellors of State through letters patent under the Great Seal, to prevent delay or difficulty in the dispatch of public business, or intended or actual absence form the UK.

These functions are exercised jointly by the Counsellors of State or by such a number of them specified in the letters patent under the Great Seal and subject to any other conditions within.

Any two Counsellors of State may preside over Privy Council meetings, sign state documents or receive the credentials of new ambassadors to the Court of St James’s.

This means that if the Queen were away or unwell and temporarily unable to exercise her powers, Harry ‒ along with the other four, exercise those powers ‒ except granting titles.

There are actually only two Counsellors of State who are currently working royals.

Prince Harry, Meghan and Archie left the Royal Family and now live in the US (Image: GETTY)

Prince Philip retired from duties in 2017 aged 96, while Prince Andrew stepped back from his duties in the wake of the Jeffrey Epstein scandal in November 2019.

The Queen does have the right to make decisions about who she wants to be a Counsellor of State, as she requested in 1952 that the Queen Mother be added to the list of Counsellors.

However, as Harry currently retains all his rights in the line of succession, it would be highly unusual for the Queen to bar him from any duties linked to those rights.

In order to lose those rights, Harry would have to renounce his place in the line of succession.

If Harry or indeed Andrew were to renounce their succession rights or otherwise decline to take up Counsellor of State duties, it is possible that Prince Edward or Princess Anne could be called on to take up the positions until William’s children are old enough.