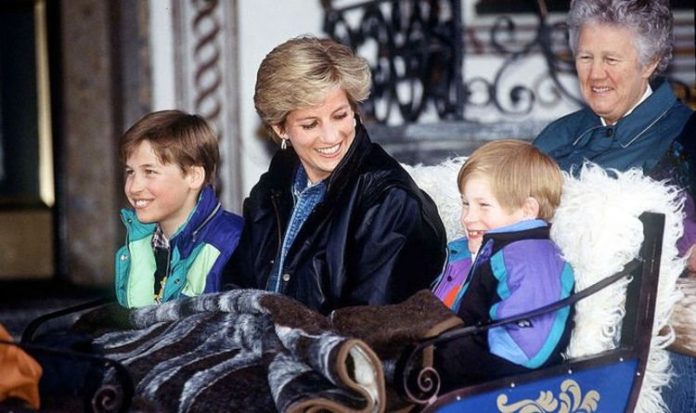 The Duke of Sussex, then aged 21, chose the title Sentebale, which means ‘forget me not’ in Sesotho – a reference to Diana’s favourite flower. He founded the charity with Prince Seeiso, of the Basotho Royal Family, to support young people affected by HIV and AIDs in Lesotho and Botswana.

Speaking at the Concert for Diana at the newly built Wembley in 2007, Prince Harry said the name was chosen “as a memorial to the charity work of our own mothers, as well as a reminder to us all not to forget Lesotho or its children.”

“Sentebale was his first major charity, co-founded with Prince Seeiso.

“Sentebale means ‘forget me not’ which was Diana’s favourite flower.”

Mr Fitzwilliams said Harry and William enjoyed Africa as they could “be themselves” and experienced a sense of anonymity.

Harry was 12 years old when his mother, 36, died of injuries sustained in a car crash in a road tunnel in Paris.

Diana pursued various humanitarian causes before opting for greater privacy in 1996 after she divorced Prince Charles.

Mr Fitzwilliams also said humanitarian causes pursued by Meghan, 39, in her youth show she and Harry share a “meeting of minds”.

In 2017 book The Game Changers, Meghan described volunteering at a soup kitchen.

She wrote: “I started working at a soup kitchen in Skid Row of Los Angeles when I was 13 years old, and the first day I felt really scared.

“I was young, and it was rough and raw down there and, though I was with a great volunteer group, I just felt overwhelmed.

“I remember one of my mentors told me that ‘life is about putting others’ needs above your own fears’.

“That has always stayed with me.”

The couple, who now live in an £11million property in Montecito, California, were pictured walking in Beverly Hills on Monday.

They have launched a podcast on Spotify, Archewell Audio, and signed a deal with streaming giant Netflix to produce a range of programmes earlier this year.

On Sunday, Meghan appeared on CNN’s annual Heroes TV special as she honoured those who have supported others during the coronavirus pandemic, praising the “power of human spirit”.