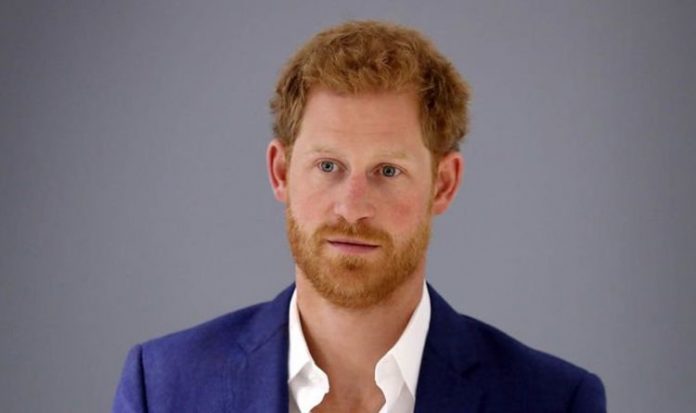 Prince Harry cannot retain his privileged status as a British prince while still comment on current affairs in the US as a normal citizen. Royal author Angela Levin said this was highlighted by the Duke of Sussex’s decision to speak about the riots in Washington, which took place on January 6.

She told Express.co.uk: “If he wants this sort of freedom he should drop all his titles and take American citizenship.

“Of course having his titles has enabled him to do various lucrative deals but de can’t or shouldn’t have it both ways.”

Prince Harry moved to the US with his wife Meghan Markle and son Archie Harrison in late March last year, a few days before he and the Duchess officially stepped down as senior royals.

Throughout the past few months, the Sussexes have worked to establish their new brand Archewell and struck two profitable deals with Spotify and Netflix.

But the couple has also dipped into US domestic matters by speaking about voter registration, the November 3 election in the country and more recently the link between social media and the storming of US Capitol.

In a recent interview with Fast Company, Prince Harry called for reforming social media after the dramatic events in Washington.

Describing the storming as “a literal attack on democracy”, he said: “We have seen time and again what happens when the real-world cost of misinformation is disregarded.

“There is no way to downplay this. There was a literal attack on democracy in the United States, organised on social media, which is an issue of violent extremism.”

Ms Levin noted Prince Harry, who is still a British citizen and prince, has “lived in America for less than a year”.

She added: “I think Harry’s decision to lecture anyone on how to live, what to do and who to vote for is a misjudgement.

“And even more so in the United States.

“He should also not do so while a member of the Royal Family and using his royal titles.

“And has prompted Americans to say quite rightly how dare the British Royal Family interfere in our lives and tell us what to do.

A poll carried out by Express.co.uk found an overwhelming majority of people did not believe it was right of Prince Harry to make similar comments.

And a few social media users branded the Duke’s comments “astonishing”, given the historic relationship and war for independence between the monarchy and the US.

In September, the Duke had already spoken about the need to reject hate and misinformation online in a video filmed alongside Meghan, who, ahead of the US election, called the upcoming vote “the most important of our lifetime”.

This prompted a member of the US House of Representatives to write a letter to the British Government in which he asked to prevent the couple from “interfering” with US politics.

In a letter addressed to the British ambassador in Washington, Jason Smith, who represents Missouri’s 8th congressional district, wrote: “By allowing the Duke and Duchess of Sussex to retain their titles, and these political comments to continue, the British Government is effectively condoning interference in the 2020 United States Presidential Election from officials at the highest level of the British establishment.”

He added: “As you know, the British Royal Family has long observed a policy of strict neutrality in regard to political matters.

Prince Harry and Meghan retained their full royal titles after Megxit but can no longer use their HRH styles.