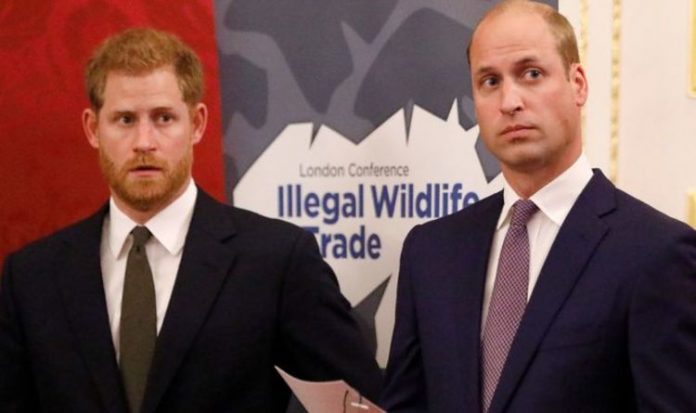 Prince Harry and Prince William’s “reconciliation” may still be facing some “big barriers”, according to royal commentators. The Duke of Sussex and the Duke of Cambridge are reportedly “mending fences” after a tense few months following Megxit. However, as Royally Obsessed podcast hosts Roberta Fiorito and Rachel Bowie discussed, the relationship between the brothers suffered a major blow in a “chilly scene” last year.

Ms Fiorito told listeners: “My low is a very specific moment – that chilly scene between William and Harry at Meghan and Harry’s final event, Commonwealth Day, back in early spring.

“I just think it was such a low because I kind of have naive expectations that we’d get a ‘the kids are alright’ moment.

“Instead we saw Harry so visibly upset. It seemed like Meghan was trying her best to be positive during that.

“And we know that there was sort of a processional snub behind-the-scenes that we learned later through biographies.”

Prince Harry and Meghan Markle attended their last event as working members of the Royal Family in March 2020 after one last round of public engagements across the UK.

Ms Bowie agreed: “For me, I just felt really sad about the whole thing.

“I think that they’ve made some headway, it sounds like, with mending fences.

According to the Daily Mail, the Duke and Duchess of Cambridge “defused the situation” by offering to join them in their seats instead of walking in with the Queen.

Mr Lacey’s book shed more light on the clash: “The only problem was that 2,000 orders of service had already been distributed around the Abbey, explaining that William and Kate would enter and process with the main royal party – and making no mention at all of Harry and Meghan.

READ  Prince William's heartbreak at Diana over Panorama interview: 'Why did you do it?' | Royal | News (Reports)

“So there was the snub in black and white – set out for all to see. Observers also noted that Harry’s face was ‘quite tense and unsmiling’—and that when William sat down close to him, he barely greeted his brother.

“Throughout the service, Meghan megawatted away with her best TV smile but, as the ceremony progressed, Harry appeared to grow gloomier.

“According to one observer, ‘his accelerated blinking even suggested he might have been fighting back tears.'”