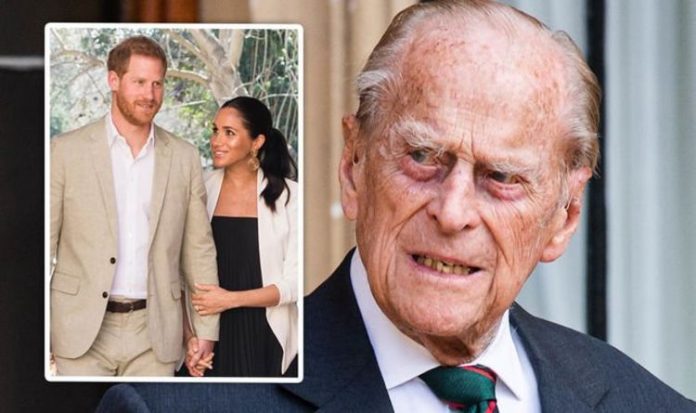 Prince Philip was “very upset” when Meghan and Harry announced to the world their intention to step down from their royal roles, according to royal biographer Ingrid Seward. The experienced royal was also aware, she added, the impact Megxit would eventually have on the Crown and the questions it would raise.

She told Fox News: “Internally, Philip was very upset, but he wasn’t going to let Harry see that.

“And he’s always going to support his wife.

“He knew that Harry and Meghan leaving would be damaging to the monarchy because people will then say, ‘What’s so awful that this young couple couldn’t bear to be part of it?’”

Meghan and Prince Harry published a bombshell statement in early January detailing what they were planning to do in the future.

According to their first plans, the couple would have retained their full titles and the right to carry out royal duties.

However, the couple would have also worked part-time on their own financial ventures, in order to become independent from the Sovereign Grant.

During the meeting taking place at Sandringham a few days after this announcement, however, much of the Duke and Duchess of Sussex’s plans had to change.

The Queen, Prince Charles and Prince William could not agree on a ‘half-in, half-out’ solution.

This meant Meghan and Harry stepped down entirely as working royals and relinquished the use of their HRH styles as well as their well-oiled brand Sussex Royal.

Prince Philip was at Sandringham during the meeting.

However, Ms Seward has claimed the Queen wanted to protect her elderly husband from this painful summit and asked a family friend to take the Duke out for a ride and away from Sandringham House.

Ms Seward wrote: “The Queen refused to allow their shenanigans to get to her husband.

“So, when she called an emergency summit at Sandringham on January 13, attended by her son the Prince of Wales and grandsons Prince William and Prince Harry, as well as their senior advisors, she asked one of her house guests, Countess Mountbatten, to drive him away from the house at least for the duration of the meeting.

“While they sat in the long library on the ground floor and thrashed out a solution that would allow Harry and Meghan their freedom without bringing the Royal Family and the Crown into disrepute, Philip remained out of the way.

“Buckingham Palace later released an unusually personal statement from the Queen saying that the family were entirely supportive of Harry and Meghan’s desire to create a new life as a young family.”

Prince Philip liked Meghan very much as he could relate to her status of outsider, the author said.

When he joined the Royal Family in 1947, the Duke was treated “appallingly” by royal courtiers, the expert added.

However, the sympathy and understanding he may have for the Duchess of Sussex would never get in the way of his support for the Queen.

Ms Seward said: “I think that Philip really understood that Meghan was going to find royal life difficult and he was supportive of her.

“He will always support the Queen.

“Harry and Meghan had their own agenda really.

“But they will also have to face the consequences.”