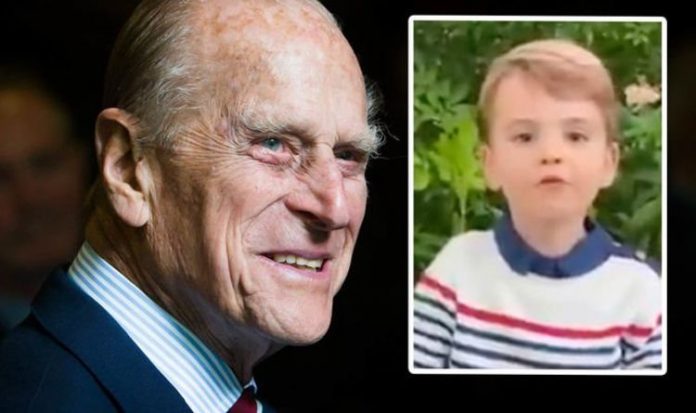 With age, Prince Philip had to give up a few of his beloved hobbies for the sake of his health, royal biographer Ingrid Seward has revealed. However, the Duke of Edinburgh has always managed to keep himself busy and find new focuses and passions.

“He loves Mary Berry. He’s addicted to those cooking programmes.”

Last year, during a BBC Christmas special, his mother revealed to the cooking expert the two-year-old prince had a soft spot for her.

During a chat focused on the importance of providing good and nutritious meals to children and involve them in the kitchen, Kate, Duchess of Cambridge, told Ms Berry her youngest son was able to recognise her whenever she popped up on TV.

Kate explained the little Cambridge was helped by the fact he had already seen multiple times Ms Berry’s face on the spines of her cooking book at Kensington Palace.

The Duchess also stunned Ms Berry by confessing her name, Mary, has been one of the first words Louis ever pronounced.

An insider who spoke to earlier this year added: “Prince Louis likes nothing better than to check on Mary Berry cookbooks.

“He loves the pictures, points out all the things he wants to eat, with The Very Chocolate Cake, Plum Crumble seeming to be hot favourites, and fruit scones being a must.

“Whenever he sees Mary on the television, he whoops and claps his hands.”

Prince Philip is currently staying at his five-bedroom cottage at Sandringham, Wood Cottage.

This house became his main residence after he stepped down from public duties in August 2017.

In March, the Duke of Edinburgh decided to spend the months of self-isolation with the Queen at Windsor Castle.

He then followed her to Balmoral Castle in August, before returning to Norfolk in mid-September.

Throughout his life, the elderly royal has been famously passionate about polo, shooting, fly-fishing and carriage driving among other hobbies.

Aged 50, the Duke decided to give up polo and start driving the historical carriages the Royal Family has collected throughout the decades.

Speaking about his carriage driving skills in an interview in 2017, Prince Philip joked about “smashing regularly” his Balmoral Dogcart.

He said: “It had to be rebuilt up every year because it got smashed regularly.

“I drove in Poland in the international, I didn’t smash it up that time, but it usually got smashed.”

Prince Louis is a fan of Mary Berry (Image: BBC)

The Duke has also taken part in several shooting parties in his life – but was forced to stop after undergoing surgery in 2011.

Ms Seward noted: “Philip had to give up shooting after he had a stent inserted in his heart in December 2011.

“The fear was that the recoil of the gun when it was fired might dislodge the stent.”

Prince Philip received treatment for a blocked coronary artery at the Papworth Hospital in Cambridgeshire just a few days before Christmas 2011.

The Duke has since picked up fishing, the expert added.

She wrote: “Since then, he has been obsessed with fishing and it has become his main outdoor activity after carriage driving.”