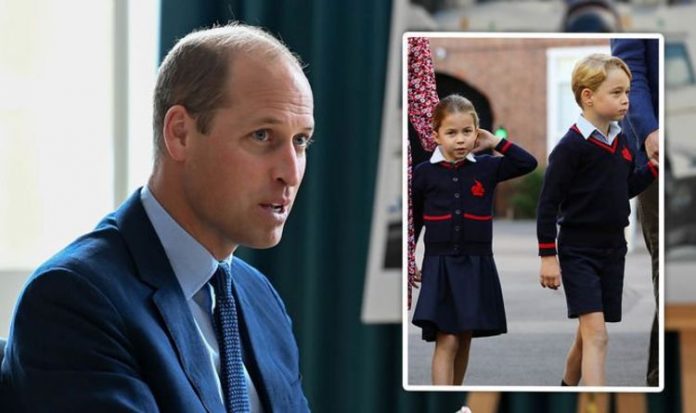 Prince William spoke about a sense of “relief” at the sight of children returning to school after the lockdown. During a poignant trip to Northern Ireland, the Duke of Cambridge said: “I think every parent is breathing a sigh of relief that school has started again. Five months – it’s been wonderful, but it’s been a long five months.”

Prince George and Princess Charlotte are believed to have returned to their school in London, Thomas’s Battersea, this week.

Prince William and Kate, Duchess of Cambridge, moved to their home in Norfolk in late March, after Prime Minister Boris Johnson shut down schools to most pupils to quash the spread of the virus.

While at Anmer Hall, the pair committed to homeschool Prince George, then on Year 2, and Princess Charlotte, who last September had started Reception.

At the height of the coronavirus crisis, the couple opened up on their efforts in a rare interview.

Speaking to the BBC in April, Prince William jokingly said homeschooling was “fun”, prompting a glance from Kate.

Explaining they didn’t allow their children to relax on their studies even during the stricter months of lockdown, Kate added: “We don’t actually tell the children we’ve actually kept going through the holidays.

Speaking about how they had implemented their children’s study regimen, Kate added: “Someone gave me some very good advice pre-the holidays to put in some structure.

“There’s a pretty strict routine here at home that’s massively helped us all – just having a bit of routine, bit of normality. But it is unusual.”

The age gap between George and Charlotte created the Cambridges a few issues while homeschooling, as revealed by Kate in May.

Appearing on ITV’s Their Morning, the Duchess of Cambridge said: “George gets very upset because he wants to do Charlotte’s projects.

Prince William had already confessed homeschooling had helped him realise he is not as patient as he thought he was.

Appearing on BBC Radio 5 Live’s That Peter Crouch Podcast, the Duke said: “Probably that my patience is a lot shorter than I thought it was.

“That’s probably been the biggest eye-opener for me, and that my wife has super patience.”

Championing the importance of normalising speaking about mental health on the workplace, the Duke said it is time for the community to take care of the first responders’ wellbeing.

He said: “But as you care for us in our time of need, so too must we ensure that we are there for you when you need it the most.

“We must ensure that you have the right support in place each and every day.

“I know first hand, that even in routine circumstances, those of you on the frontline can face immense challenges that can naturally have a significant impact on both your physical and mental health.

“Firstly, it’s important that we recognise that.

“And secondly, it’s important that we do all we can to support you through it.”

In his speech, the Duke also acknowledged and thanked blue-light workers for their relentless effort during the ongoing pandemic.