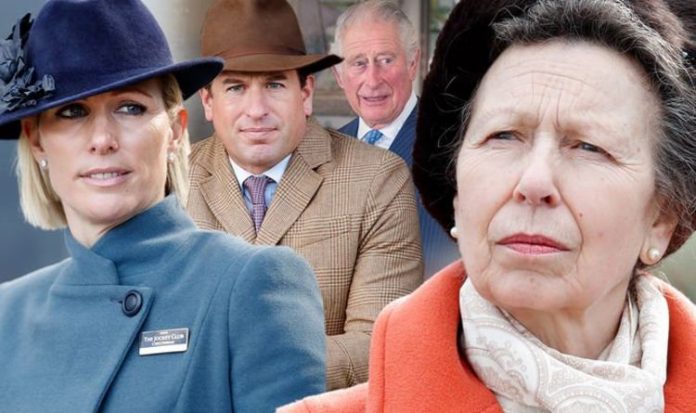 Princess Anne is often described as one of the hardest working members of the Royal Family. The only daughter of Her Majesty the Queen, Anne grew up alongside brothers Prince Charles, Prince Andrew and Prince Edward. She herself has two children, Zara Tindall and Peter Phillips.

On their birth, she and her ex-husband Mark Phillips took the unusual step of removing Zara and Peter’s royal titles.

It was done in order for them to live as “normal” lives as possible.

In interviews and documentaries, Anne often comes across as reserved, serious, and unafraid to say things as they are.

Her love of sports and equestrian has particularly solidified her as being perceived as a woman of guts and grit.

However, during a BBC documentary to mark her 60th birthday, Zara and Peter revealed the true side of their mother: the Anne at private family gatherings.

Peter said: “When she’s in an environment of family and friends and so on, she definitely relaxes a lot more.

“She is great fun then.

“She’s always the one laughing the loudest.”

Later on in the documentary, she revealed how hard it was to let go of the many projects she had her hand in.

She explained: “I think I’ve pretty much stopped taking anything on.

“Only every time I say that someone or other, the Queen Mother or perhaps my father say ‘perhaps it’s time you cut down but, by the way, we need you to do this’.

“It’s not as easy as you’d like it to be – it’s quite difficult to give things up.”

When asked whether, at her age, she thought there was any reason to slow down, Anne drew attention to the rest of her family.

She said: “Look around at the members of my family who are considerably older than me and tell me whether you think that sets an example that suggests I might.

“It’s unlikely,” she added with a laugh.

Anne said that while some of her hard-working nature was in the genes, a lot of it came down to having an “interested and enthusiastic and funny family”.

As a gift, she was promoted to the role of general and air chief marshal in the Army and Royal Air Force.

The move brought her in line with her rank in the Royal Navy.

It is a tradition that senior royals are treated as military members and receive promotions as they get older.