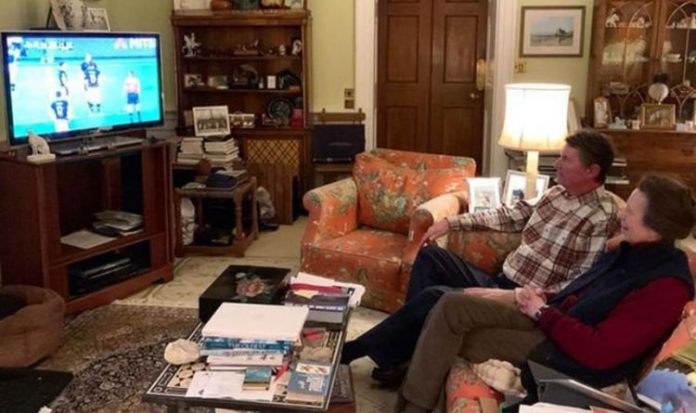 Anne, a keen rugby fan, is the royal patron of Scottish Rugby. Whilst she was unable to attend the Twickenham match in person due to coronavirus restrictions Anne did watch the game at home with her husband, Sir Timothy Laurence.

To mark Scotland’s 11-6 victory over England the official Royal Family Instagram account shared a photo of the couple watching the game from their Gatcombe Park home.

In the image Princess Anne and her husband can be seen watching the match on television from a sofa.

A coffee table, which holds a number of books, is immediately in front of the couple whilst a dog bed is by the TV.

The photo sparked a mixed reaction from royal fans with many praising the image for being “normal-looking” while others mocked it for being “claustrophobic”.

Another joked: “And I was worried about my clutter!”

A third added: I feel a little claustrophobic just looking at all the stuff in their living room.”

It read: “As Scotland Team Patron, The Princess Royal often supports the team from the stands.

“Her Royal Highness and Vice Admiral Sir Tim cheered Scotland on from home today as they played England for the Calcutta Cup, 150 years since their first match.”

Anne isn’t the only Royal Family member with a close connection to rugby as Prince William and Prince Harry are royal patrons of the Welsh and English rugby unions respectively.

A number of Instagram users noted how homely Anne’s living room appears to be.

One commented: “A standard front room/lounge. Love it – feels like home.”

A second added: “This is possibly the most normal looking royal house I think I’ve ever seen.”

Another wrote: “I love the normalcy of this photo.”

Other royal watchers focused on the collection of books visible on Anne’s coffee table.

Several of the works focused on wildlife and household pets.

They included a copy of Felicity Wigan’s ‘The English Dog at Home’ and a bird identification guide titled ‘A Field Guide to the Birds of Britain and Europe’.