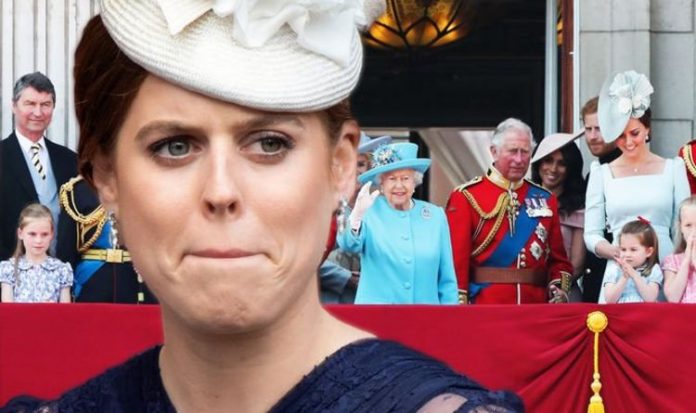 The York siblings have both found themselves heavily in the spotlight as they take on more roles following Prince Harry and Meghan Markle’s decision to stand down from the Royal Family. The sisters have helped carry out charitable roles, as well as make video conference appearances on behalf of the Firm, helping the Royal Family stay in the public eye. With the surprise announcement that Beatrice had also secretly wed her financier husband Edoardo Mapelli Mozzi, the feel-good spirit garnered by the Duke and Duchess of York’s children has helped improve relations with the public.

But despite the excitement generated by their more senior roles within the Royal Family, Beatrice once claimed she struggled to balance her private and public life.

She said of her and Eugenie’s difficulties: “It’s hard to navigate situations like these because there is no precedent, there is no protocol.

“We are the first: we are young women trying to build careers and have personal lives, and we’re also princesses and doing all of this in the public eye.”

They cited their own parents’ difficulties with the press, which in recent months has seen Prince Andrew’s association with paedophile Jeffrey Epstein dominate the headlines.

Speaking during a Vogue interview ahead of her wedding to Jack Brooksbank two years ago, Eugenie added: “We’ve had some serious grounding from our parents.

“They’ve had their fair share of terrible media interest and it makes us stronger.

“We believe very strongly in who we are, and the support system of our friends and our family is pretty incredible. There’s no point being angry with anyone for beating us up – we just need to shine light and love in the world.”

Yet throughout their struggles, both Eugenie and Beatrice have remained rocks for one another, perhaps most strikingly shown by their decision to choose one another as their Maid of Honour.

Eugenie, 30, added: “There was a horrible article that had been written about Beatrice and she got really upset.

“We were just about to step out and she had a bit of a wobble and cried. I was looking after her.

“And then about an hour later, I had a wobble and started crying and Bea was there for me.”