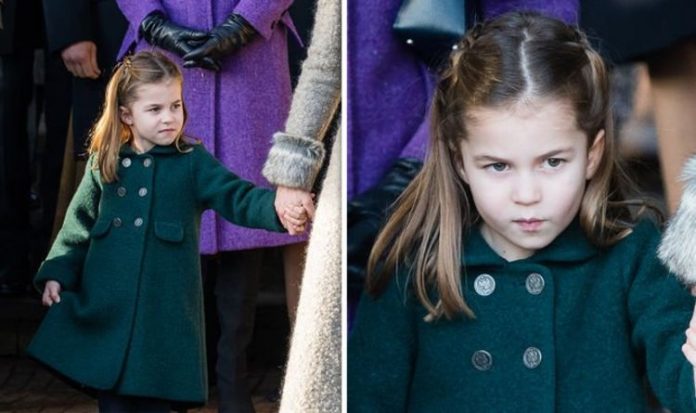 Kate and William’s daughter curtsied to the Queen after the Royal Family attended church last year near Sandringham House. Charlotte, who was four at the time, appeared for the first time at St Mary Magdalene’s Church for the 11am Christmas service, along with her brother Prince George, her parents and the rest of the Royal Family. Prince Louis remained behind, as he was just one at the time.

Charlotte was seen confidently joining her mother in meeting well-wishers who had gathered to catch a glimpse of the royals, as hundreds do every year.

Charlotte received a few gifts from members of the public and even hugged one royal fan.

When it was time for the Queen to head back to Sandringham, Charlotte joined other royals in seeing the monarch off.

As the royals headed down the steps of the churchyard, Kate was spotted having a quick word with Charlotte while the Queen got into her black Bentley.

READ MORE: George is usually ‘separated from Kate and William’ at Christmas

Kate curtsied as the Queen’s car drove off, which was followed by a little curtsy from Charlotte.

The young royal held the hem of her coat as she bobbed down to show respect to her great-grandmother.

Karen Anvil, who famously took a picture of Meghan, Harry, Kate and William two years ago, gave Charlotte a doll.

The Queen instead spent Christmas with Prince Philip at Windsor Castle, where they celebrated quietly.

Prince Charles and Camilla stayed at their Highgrove estate in Gloucestershire for Christmas Day.

Being separated means all these royals will have to miss out on their beloved Christmas traditions.

These include the gift-giving on Christmas Eve, when each member of the family gives cheap, joke gifts to each other.

Over the years these have included a toilet seat for Prince Charles, a ‘grow your own girlfriend’ kit for Harry and a shower cap that said ‘Ain’t Life a B****’ for the Queen.

Most importantly, the royals will miss out on seeing their loved ones over Christmas, something that will resonate with many people across the UK and the world.