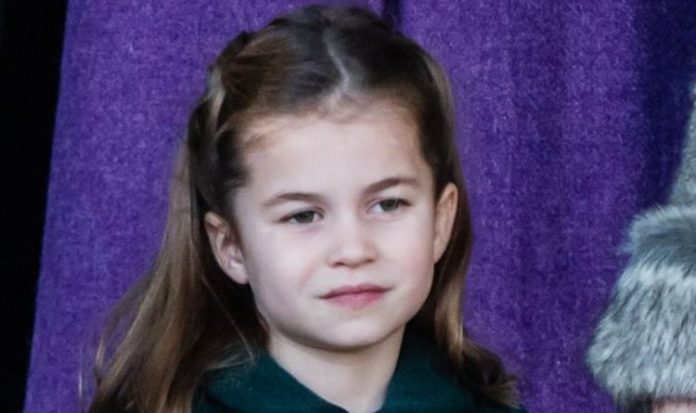 Last week, the Duchess of Cambridge was seen in a video appearance with teachers wearing a navy tweed jacket and with her hair styles in a ponytail. As she was speaking to educators about teaching children via video call, the Duchess twirled her hair in a gesture that reminisced of a photograph of Princess Charlotte during her first day of school in 2019.

In the image, the then-5-year-old royal is seen nervously playing with her ponytail as she walks into Thomas’s Battersea with the Duke and the Duchess of Cambridge and big brother, Prince George.

Kate and Charlotte have recently picked up a new hobby together, according to a royal expert, who explained how the Cambridges are spending the national lockdown.

She said: “Kate is aware of screen time and tries to limit the children being exposed too much.

“When the children have a break, she takes them outside, come rain or shine.

“She wants them to get fresh air and be in nature.

“She loves to pick vegetables with them in the gardens.”

The commentator explained that, as parents, both William and Kate teach their children new things every time they go on walks.

According to Ms Nicholls, the young royal, who has previously made her love for spiders public during an interview with Sir David Attenborough, likes to observe the creatures closely.

She said: “If they are learning about rivers or the sea, she and William try to incorporate that into their walks.

“Charlotte is a massive fan of spiders and loves looking at them and learning about them. They have a close bond.

“So they go on spider hunts so that she can see them up close and then let them go, which is so sweet.”

The Cambridges have been spending lockdown at Anmer Hall in Norfolk, where Prince George, Princess Charlotte and Prince Louis have purportedly enjoyed playing with the snow.