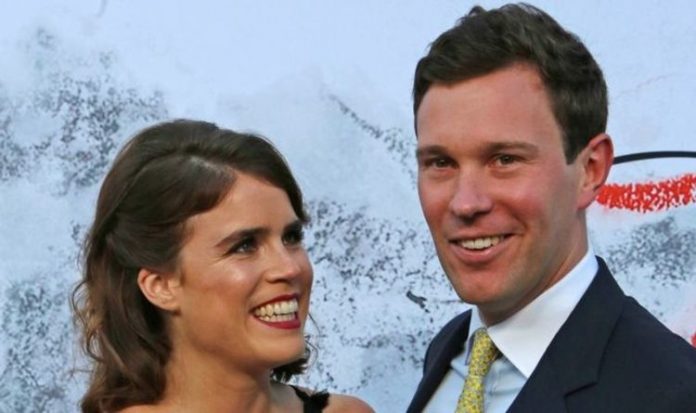 The Queen’s granddaughter last week revealed she is expecting her first baby in early spring, saying she and Jack are “so excited” to become parents. But before the couple welcomes the royal tot into the York family, they are set to mark an important milestone together. The 30-year-old and her beau will celebrate their second wedding anniversary on October 12, marking two years since they tied the knot at St George’s Chapel in Windsor Castle.

The young couple had been dating for seven years.

Prince Andrew and Sarah Ferguson’s youngest daughter was introduced to Mr Brooksbank on a skiing holiday in the Swiss resort of Verbier, loved by celebrities and royals alike.

Fergie responded to her daughter’s baby news on Instagram, saying she could not wait to be a grandmother.

The 60-year-old said she felt “thrilled” about the prospect of welcoming the newest member of the Royal Family.

She was snapped grabbing lunch at Harry’s Bar in Mayfair with her new brother-in-law Edo.

And on Wednesday morning she was again seen running errands, opting for a similar look.

The princess draped her growing baby bump in a black-and-green pattern knee-length dress which was cinched in with a belt above her waist.

She paired it with suede black knee-length boots and a black handbag.

Eugenie and Jack have not revealed the exact due date of their child.

Royal pregnancies are usually shrouded in secrecy and it is normal for the parents to keep the expected arrival date of their little one under wraps.

Royal fans are already speculating whether Eugenie will follow in the Duchess of Cambridge’s footsteps by posing with her baby outside the hospital after the birth.

Or she may choose a more private route like that taken by the Duchess of Sussex.

Meghan and Harry did not introduce Archie to the outside world until hewas three days old.