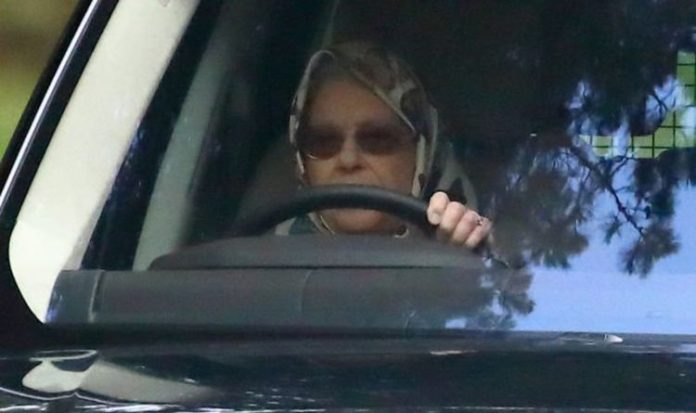 After cutting her holiday at Balmoral Castle short, Her Majesty travelled to her Norfolk estate to spend time with Prince Philip. And now she has been seen behind the wheel of a black Range Rover on the public roads.

Due to the coronavirus pandemic, the Queen has been forced to adapt to the travel restrictions and travelled down to the Sandringham estate – based in Norfolk – earlier this month having spent their annual summer holiday in their Scottish Balmoral estate.

The move is only a temporary one, however. Both senior royals will have to move from Sandringham to Windsor Castle in October.

According to reports, Prince Philip would rather have remained at Sandringham, but once again this would have led to problems with staff.

Sources close to the matter claimed there would not have been enough on hand to create two separate anti-coronavirus bubbles to protect both senior royals at the same time.

The Queen will return to Windsor next month in order to carry out her royal duties.

The spokesperson said: “Subject to the finalisation of the autumn programme, Her Majesty’s intention is to return to Windsor Castle in October and to resume the use of Buckingham Palace for selected audiences and engagements.

Royals have had a number of plans impacted by the coronavirus pandemic throughout the year.

Normally, the Duke of Edinburgh lives in Sandringham while the Queen carries out her royal duties in Windsor.

The Queen and Prince Philip stayed at Balmoral for around six weeks, but the following period will see them spending even more time together.

Joe Little, managing editor of Majesty magazine, said the couple have spent more time under the same roof recently than in “many years.”

Sandringham, in Norfolk, is the Queen’s country estate and has been used by British monarchs since the 19th century.

It is still often used by royals today, with Sandringham House surrounded by 60 acres of garden, according to the Sandringham Estate website.

However, these plans may be affected if the government’s new ‘rule of six’ coronavirus restrictions continue on until the end of this year.

This has apparently left the Queen furious as royal staff have mutinied over the plans, with many refusing to go keep the estate running while the Royals occupy it.

But coronavirus measures mean they would have to remain there through the Christmas period in order to maintain a protective ‘bubble’ around the Queen and Prince Philip.

An ‘insider’ told the newspaper the worker action is “absolutely unprecedented” and added: “The Queen is furious.”

They said staff felt as though they had been “pushed too far” by the request to stay in isolation from family members over the Christmas period.

If the Queen were forced to stay at Windsor Castle, it would be the first time she would have to do so in over 30 years.