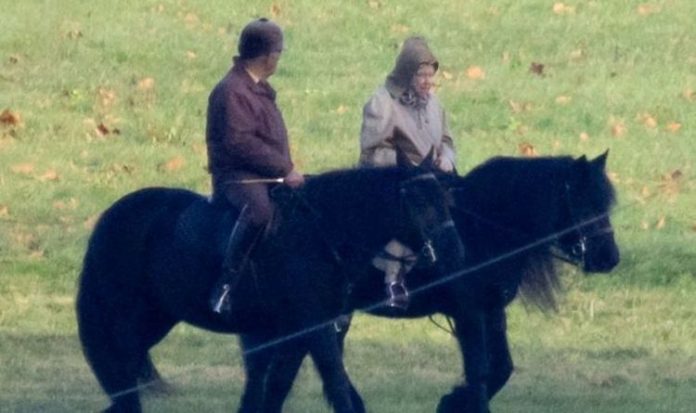 The Queen braved the freezing temperatures in southern England this morning and went horse riding in the company of an aide. The monarch, accompanied by Head Groom Terry Pendry, was appropriately dressed to face the cold, wearing a coat with a hoodie, a headscarf and gloves.

The Queen was last seen in public on Remembrance Sunday, when she attended the solemn National Service of Remembrance alongside with senior members of the Royal Family.

During the ceremony, the monarch looked on as Prince Charles laid a wreath of red poppies on the Cenotaph on her behalf, as he has been doing since 2017.

On the previous week, just hours before the second national lockdown begun in England, the Queen was spotted in a car heading to Westminster Abbey.

There, the monarch, wearing for the first time in public a face covering, paid tribute to the Unknown Warrior, the burial of whom happened 100 years ago.

During England’s second national lockdown, ending tomorrow, the Queen continued to work, holding weekly meetings with the Prime Minister over the phone and receiving on a daily basis the Government red boxes.

Barred by lockdown rules and safety measures in place from carrying out face-to-face engagements and visits, the Queen took part over the weekend in a digital online group chat to celebrate the “wonderful” efforts of Commonwealth volunteers.

During the video call, the Queen spoke to three winners of the Commonwealth Points of Light award, which celebrates outstanding individual volunteers who are making a change in their community.

The Queen during the National Service of Remembrance (Image: GETTY)

After having heard from the recipients of the award about their work, the Queen said: “Thank you all for taking part in this programme.

“I’m delighted to have heard your stories and I think it’s wonderful work that you’re all doing, and volunteering so much.”

And she was delighted to hear a 45-strong Cypriot children’s orchestra performing a song in celebration of her recent 73rd wedding anniversary.

The Queen with the Cambridges, Camilla and Prince Charles during the Trooping the Colour parade (Image: GETTY)

The Queen paying tribute to the Unknown Warrior (Image: GETTY)

With just a few weeks to go, the Queen is likely planning how to spend Christmas as coronavirus continues to be a concern for the country.

After the Government issued guidelines on how families across the UK will be allowed to spend the festivities, a royal insider has claimed the monarch and Prince Philip will celebrate Christmas Day with Prince Edward, their youngest son, and his family.

A source said: “Prince Edward and his family will be one of the two in her bubble.”

Prince Charles and Camilla, Duchess of Cornwall, could also join the elderly royals over the festive period.

His seniority in the line to the throne and the fact that he doesn’t have any young children has led to thinking he and Camilla would be the most likely candidates to join the monarch and the Duke of Edinburgh.

However, other royals may join the Queen and Prince Philip on Boxing Day if the couple were to travel to Norfolk as they normally do in late December.

The source told the Daily Mail:  “If they go to Sandringham, their traditional Boxing Day shoot could still take place, enabling them to see members of the family unable to join them on Christmas Eve and Christmas Day.”

Prince Charles and Camilla could spend Christmas with the Queen and Prince Philip (Image: GETTY)

Shoots can legally take place as they are classified as organised outdoor sports, so up to 30 people could meet up the day after Christmas.

This means even some of those members of the Royal Family who can’t be included in the Queen’s Christmas bubble may be able to hold a socially-distanced meeting with the Queen during the Boxing Day shoot.

Government guidelines will allow a maximum of three households to meet from December 23 to 27 across Wales, Scotland and England.

The easing of the coronavirus measures will last longer in Northern Ireland, where three households will be able to meet between December 22 and 28.