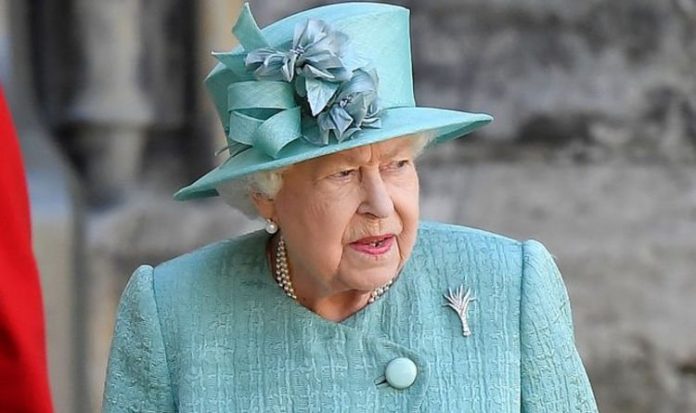 The royal family is “upset” with Prince Harry and Meghan Markle’s recent decision to speak out about politics. Buckingham Palace officials were stunned after Prince Harry decided to go rogue and hand out a tacit political endorsement in the US presidential race. However, royal officials hit back at the Duke of Sussex with a carefully crafted swipe, according to a royal expert.

Royal expert Richard Mineards, who lives close to Harry and Meghan in Santa Barbara, warned the couple against against getting involved in US politics.

Mineards weighed in on the couple’s recent TV message, as he singled out Harry for particular scorn.

The Montecito Journal columnist told Access Hollywood: “They did not mention the president in their comments but it was clearly perceived as a swipe at the White House by Harry and Meghan.

“I particularly would caution Prince Harry as Queen Elizabeth’s grandson because royal members do not talk about political activities or politicians publicly, particularly criticising them, and this has not gone down well in England.”

He continiued: “Buckingham Palace were asked for a comment about how they perceive the situation and they said they do not comment on non-working royal members.

“That is really a double whammy for both Harry and Meghan because to be called non-working royals means they have been sidelined.

“Harry likes to perceives himself still to be a working royal, although somewhat limited now that he lives in the US.

“He still wants to be involved in royal ceremonies and royal activities, al5though it’s limited by virtue of where he lives.”

A spokesperson for the couple said the comments did not refer to any specific political party or candidate, but were instead “a call for decency”.

It was their first joint TV appearance since they ceased being working members of the Royal Family in March.

Given the past notorious animosity between the Duchess of Sussex and President Donald Trump, the broadcast was seen as the royal pair’s implicit endorsement of his rival, Joe Biden.

Asked about the Harry and Meghan video at a White House press briefing this week, President Trump replied: “I’m not a fan of hers. And she probably has heard that.

“But I wish a lot of luck to Harry, cause he’s going to need it.”