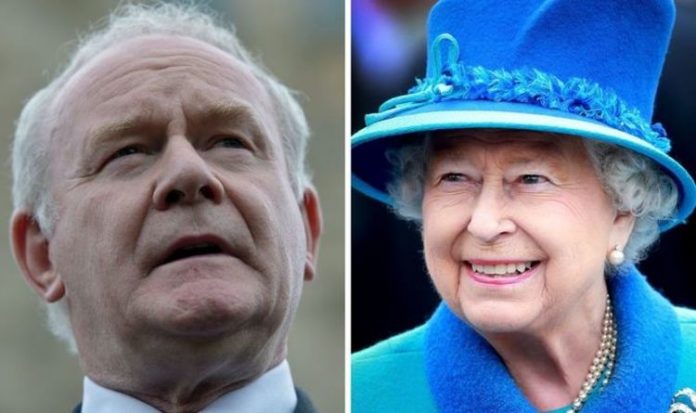 Eight years ago, Her Majesty and Mr McGuinness, a former IRA commander, shared a historic handshake, which was seen as part of “the national reconciliation process”. Her visit came a year after she toured the Republic of Ireland, and the symbolic gesture between the Queen and Mr McGuinness was described by then-Prime Minister David Cameron’s spokesman as “taking relations between the two countries to a new level”. They added: “We think it is right that the Queen should meet representatives from all parts of the community.”

But in 2016, when the Queen returned to Northern Ireland, she was greeted once again by Mr McGuinness – a year before he stood down as deputy First Minister.

Upon his arrival, the pair shared another handshake, before Mr McGuinness asked the Queen: “Are you well?”

“We’ve been quite busy – there’s a lot going on. I’ve had two birthdays, so that’s kept me quite busy!”

Their visit was the third high-profile Royal Family trip to Northern Ireland in weeks, as it followed tours by Prince Charles and Camilla, Duchess of Cornwall, and Prince William and Kate Middleton.

But it was the historic visit in 2012 which led to many celebrating the meeting between the Queen and Mr McGuinness.

Then-Sinn Fein President Gerry Adams said: “It brings our journey of relationship building within this island and between these islands onto a new plane.

“I think the vast majority of unionists will be pleased this happened because they know it was essentially a real gesture towards their sense of identity and their sense of allegiance.

JUST IN: Royal Family members Queen chosen to be in Christmas bubble

“Whatever personal feelings Martin may have, no more than myself, doesn’t come into it. It was a good thing for him to do and I commend him for it.”

Across the world, the likes of former US secretary of state, Hillary Clinton, hailed the event as “the most remarkable sign of change yet” in the Northern Ireland peace process.

The Queen is renowned for her presence as the nation’s most global representative, and has met a host of the most important leaders in world history.

As well as the likes of South African President Nelson Mandela, the Queen has met dignitaries across her impressive reign as monarch.

This included a visit where she made an impromptu joke to Pope John Paul II as she attempted to break the silence between them.

Her Majesty had been visiting the Vatican in a symbolic meeting before they discussed hopes on how to progress Christian unity ahead of a summit.

The visit came 20 years after they had originally met and was part of a four-day visit to Italy.

But it appears that moments after the frail John Paul II had shaken hands with the huge number of people in the Queen’s entourage, the monarch opted to make a joke to break the silence.

She turned to John Paul II, who sat next to her, and said: “We’ve bought a lot of people with us I’m afraid.”

Smiling, the Queen then shared a laugh with John Paul II before photographs of the pair, alongside Prince Philip, were taken.

Discussing the visit, the Queen said “it was a great pleasure to the Pope again”, and both recalled their previous visit – when John Paul II came to Buckingham Palace in 1982.

The pair then exchanged gifts, which included “50 facsimile prints of Canaletto drawings bound in leather for the Pope, and a facsimile copy of a 13th century illuminated New Testament from the papal library for the Queen”.

The Queen said: “We have a huge collection of Canalettos and I hope this will be of interest for the library here.”