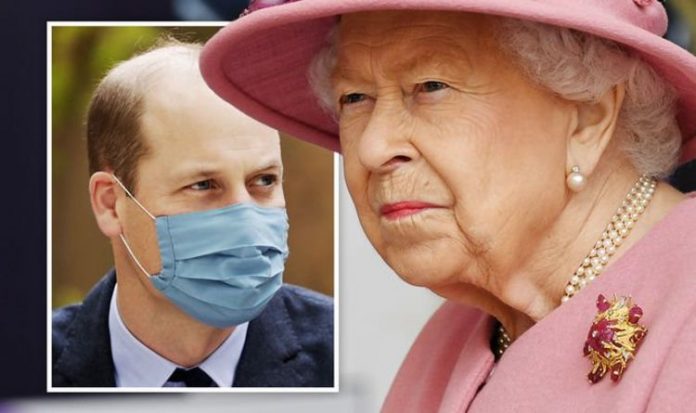 The Queen knew about Prince William’s illness and was worried about his wellbeing, a source said. They told Vanity Fair: “The priority was keeping HMQ shielded and safe, which was thankfully what happened.

“But of course the Queen was worried for Charles and William and relieved that they suffered only minor symptoms.”

Prince William suffered from coronavirus in April, a few days after his father had tested positive for the virus.

The Duke of Cambridge worked through the month by carrying out several engagements via video or phone links.

He only revealed his diagnosis during a recent face-to-face event, when he told an onlooker he had suffered from the virus but didn’t say anything to the public not to alarm the nation.

In early April, Prince Charles had just left his seven-day isolation period while Prime Minister Boris Johnson was being hospitalised at St Thomas’ in

After news of his illness broke, royal commentators and watchers reacted to William’s decision to keep this diagnosis a secret.

Royal expert Robert Jobson lashed out on Twitter: “Prince William’s decision to LIE about contracting COVID-19 earlier – for whatever reason – is appalling.

“Kensington Palace were asked several times by the media whether Prince William had contracted the virus and told categorically ‘no’.

“This has created a serious issue of trust.

“If the Palace is prepared to LIE about an issue as serious as Prince William, second in line to the throne, contracting COVID-19 what else have they LIED about when questioned by the press and why should the media believe any denials going forward?

On the other hand, biographer Ingrid Seward believes the Duke showed leadership by hiding his illness at a time when both Mr Johnson and the direct heir to the throne had already been affected by the virus.

She told : “I think he quite rightly thought it would be too scary to have so many prominent people with the illness together.

“He very wisely thought ‘well it’s not going to help anyone’ for him to say ‘I’ve got it’ so he decided to keep it quiet.”

Prince William’s last public engagement before the country’s first lockdown took place on March 19, when he and Kate, Duchess of Cambridge, visited the Ambulance Service in Croydon.

The Cambridges last met in public other royals in early March, at the Commonwealth Day service.

Following the closure of schools, the Duke of Cambridge and Kate left London to self-isolate at Anmer Hall, their home in Norfolk.

While the Duke and Duchess of Cambridge were in Norfolk, the Queen and Prince Philip were self-isolating at Windsor Castle, where they remained between March 19 and early August.

Following the easing of lockdown measures, the elderly royals travelled to Scotland where they spent six weeks before heading down to Sandringham.

The Queen returned alone to Berkshire and worked from her castle throughout October.

Last weekend, as Mr Johnson was announcing a second national lockdown, she travelled back to Sandringham, where she spent a weekend privately with the Duke of Edinburgh, before returning with him to the castle in Berkshire.