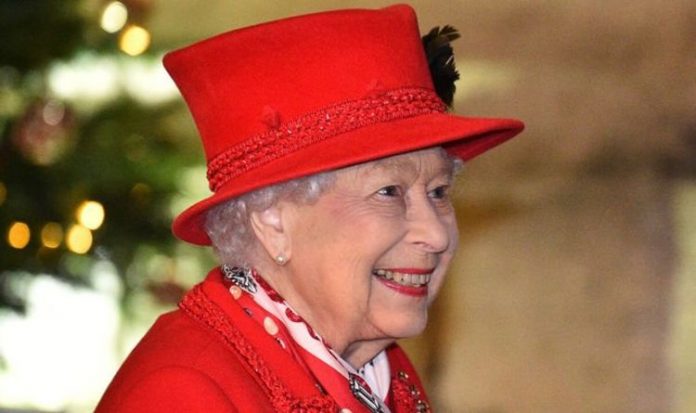 The Queen led tributes to the heroic work of local volunteers and organisations during the coronavirus crisis at a festive engagement in the grounds of Windsor Castle on Tuesday afternoon. The 94-year-old was joined by many senior members of the Royal Family, including Prince Charles, Prince William and Kate, the Duchess of Cambridge.

At the Queen’s residence in Berkshire, the royals were also treated to a Christmas carol performance by the Salvation Army band.

Despite being outdoors and observing social distancing measures, the Queen and other members of the Royal Family suffered a backlash on social media for choosing not to wear a face covering.

Reacting to footage of the royals standing on the steps of Equerries’ entrance at Windsor Castle on Twitter, one user said: “No masks.”

Another user said: “They should all be wearing masks. The pandemic is not over.”

ITV News Royal Editor Chris Ship then intervened and pointed out they did not need to wear a face covering.

He said: “They are outside. Masks are compulsory only inside where social distancing is not possible.”

Several users then backed up the royal expert, including one who said: “Thank you Chris. It is exhausting constantly stating this.”

Prince Charles, Camilla, Kate, William, The Earl and Countess of Wessex were later all pictured wearing face coverings when speaking to volunteers and key workers in outdoor gazebos.

Coronavirus guidelines in England require the public to wear face masks in indoor settings such a public transport, supermarkets and entertainment venues.

It the first time the Royal Family have attended an event en masse since March.

The Queen took part in her first royal engagement outside of a royal residence in October.

She was accompanied by Prince William as they visited the Defence Science and Technology Laboratory at Porton Down – but again both received a backlash for not wearing a face covering despite being outside and observing the two metre guidance.

The whirlwind tour had been criticised by Welsh and Scottish ministers as it comes at a time where Britons are encouraged not to travel between different tiers, but it was given the backing of the Prime Minister.

After initially stating the tour was a “matter for the Palace”, Number 10 said it provided a “welcome morale boost to frontline workers”.