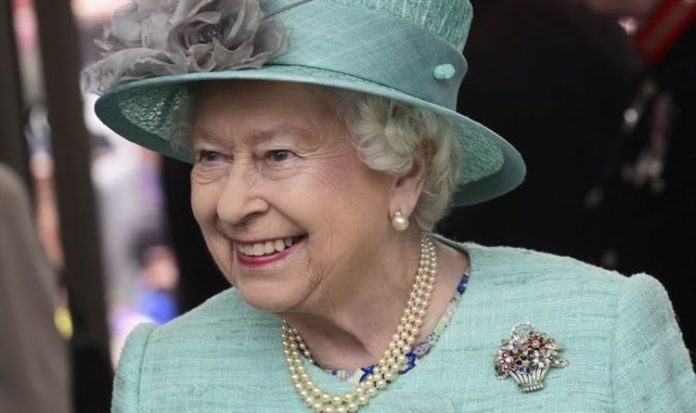 Speaking with Commonwealth volunteers via video link last week, the monarch opted to wear a diamond and ruby brooch which has not been seen often in recent times. The brooch, known as the Golden Trellis brooch, has a history going back to the Queen’s marriage to Prince Philip.

The pair recently celebrated their 73-year anniversary on November 20.

The Queen, 94, recently spoke to volunteers across the Commonwealth to hear more about the work they carried out in their respective countries.

The volunteers included wildlife conservationists. They received the Commonwealth Points of Light award, which aims to celebrate outstanding volunteering work.

The monarch decided to wear the golden brooch while chatting with the award’s recipients.

The brooch takes the appearance of a golden net, onto which diamond and ruby leaves are attached.

It is thought that the Queen received the jewellery item as a wedding gift.

It is not known who gifted it to her, although it is said to have come from the then-director of the Garrard jewellery store.

Keen-eyed royal fans may have noticed the brooch making occasional appearances over the last couple of years.

It dates back to the reign of Queen Victoria, and each reigning monarch inherits it.

Another brooch is the New Zealand Silver Fern Brooch, which was crafted for the Queen as a Christmas present by “the women of Auckland”.

As its name suggests, it resembles a fern which is one of New Zealand’s emblems. It was given to the Queen by Lady Allum, wife of the then-mayor of Auckland, in the 1950s.

During her Points of Light video call last week, the Queen spoke to various charitable figures including Nikoletta, from Cyprus, who provides free music lessons to disadvantaged children.

She also spoke to Len Peters, a wildlife enthusiast from Trinidad and Tobago.

His work has turned the nation into one of the most dense leatherback sea turtle nesting sites in the world, the Royal Family said.

The turtle conservationist has been featured in the popular Blue Planet II series, presented by Sir David Attenborough.

The Queen said: “I’m delighted to have heard your stories and I think it’s wonderful work that you’re all doing, and volunteering so much. Thank you very much.”