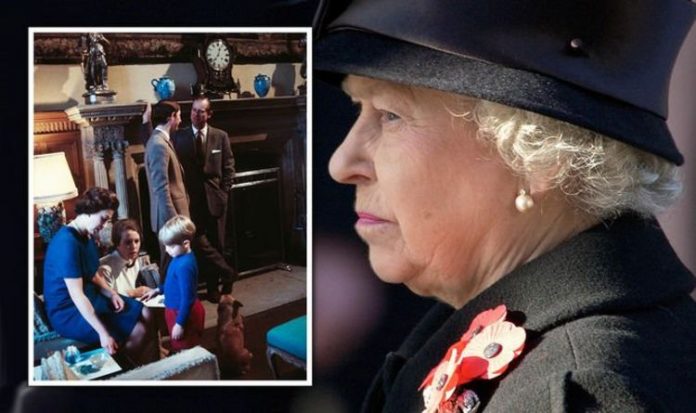 The extraordinarily intimate BBC documentary aired in 1969 before being banned from screens. It recently found its way onto YouTube, where is sent royal fans into a frenzy before being quickly removed. The 90-minute documentary, titled ‘Royal Family’, shows the Queen, Prince Philip and their children undertake duties and spend time together as a normal family.

This film, which was taken off the air at Her Majesty’s request after being deemed too intrusive, also casts the light on a much-debated issue – the Queen’s everyday relationship with cash.

The Queen is believed to only carry a £5 note in her bag on Sundays, which she donates to church.

However, in the documentary, the Queen is filmed entering a shop near Balmoral Castle, her Scottish residence, and letting Prince Edward, then five, buy lollies.

Extraordinarily, the monarch can be seen not only paying for the service but also taking money from her own bag.

Queen news: The Royal Family appears in a documentary filmed by the BBC in 1969 (Image: GETTY)

Queen news: The Queen donated £5 when she goes to church on Sundays (Image: GETTY)

Noting how sweet and rare this innocent act is, royal historian Marlene Koenig told Royal Central: “Perhaps the sweetest of all scenes was when The Queen was in a shop near Balmoral with Prince Edward and she lets him buy lollies.

“The most surprising of this is she opens her handbag and takes out money to pay for the lollipops.

Queen news: The Queen is believed not to normally carry money in her handbag (Image: GETTY)

Speaking about the Queen’s use of cash at church, a source said in 2015: “She donates to the church collection basket.

“Her butler irons a five pound note into a little square by folding it until you can only see her face.”

Royal author Sally Bedell Smith, who wrote Elizabeth the Queen: The Woman Behind the Throne, said the monarch normally carries in her bag mint lozenges, reading glasses, a fountain pen, lipstick and tissues.

Queen news: The Queen watches on as Charles and Edward play together in 1969 (Image: GETTY)

The Queen, whose brand of choice when it comes to bags has been Launer for years, is also believed to carry a portable hook, so that she can hang her bag under tables whenever needed.

The resurfacing of the BBC documentary was hugely welcomed by royal fans, some of whom have been waiting decades to be able to see it again.

One wrote on Youtube: “This documentary was on TV when I was 13. I am now 65, and loved seeing it again.”

Another said: “I didn’t think that this would ever see the light of day again. Brilliant.”

Queen news: The line of succession to the throne (Image: EXPRESS)

And a third added: “This is wonderful stuff! I don’t think I’ve ever seen it before, although I had heard of it.”

Ms Koenig noted the documentary has remained in the royal vault for decades – but after this online release by the hand of an internet user it will be impossible to prevent people from watching it and sharing it further.

She said: “It will be interesting to see if the powers that be will force YouTube to take the documentary down.

“Legally they have the right because the crown owns the copyright.

Queen news: The Queen favours the brand Launer when it comes to handbags (Image: GETTY)

“The barn door can’t be closed, however.

“It might behove the Crown to digitise and clean up the documentary, blow off the dust, and show it on TV.”

The documentary is the result of 40 hours of filming carried out between Sandringham, Balmoral, Buckingham Palace, Windsor and Holyrood.

Speaking about working with the royals, producer Richard Cawston said: “Until we made this film, I really believe that none of them had ever spoken into a microphone anything which had not been carefully prepared.”