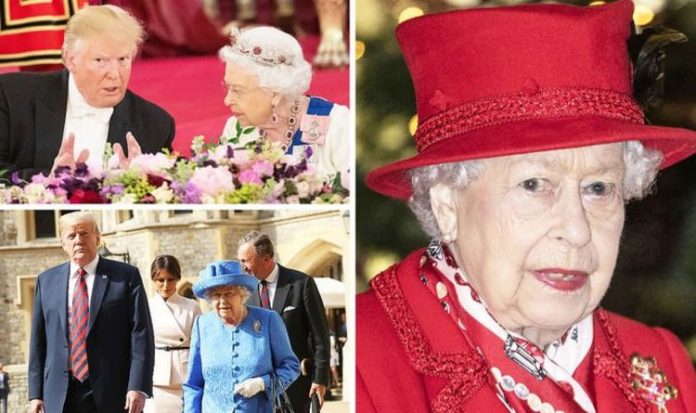 The monarch, 94, met the former US President on multiple occasions, including during a state visit two and a half years ago. Royal commentator Richard Fitzwilliams told Express.co.uk that the Queen would be relieved to no longer have to deal with the business tycoon. He predicted an easier relationship with President Joe Biden due to their shared beliefs, including in the threats posed by climate change.

The Queen has never made a public statement to pledge her support or opposition to Mr Trump – due to wanting to keep politically impartial throughout her 68-year reign.

But the former US leader, who suffered a devastating election loss to Mr Biden by 306 Electoral College votes to 232 last year, believed he made a good impression on the monarch.

Mr Trump told Fox and Friends, a show on Fox News, that he gave her the “best fun” she had in 25 years and claimed he learned the ‘news’ from “her people”.

At the time, a Buckingham Palace spokesperson stated that Mr Trump’s remarks were “not something” they would be willing to comment on.

It followed the then-President and the former First Lady Melania Trump’s visit to the Queen in 2018.

The Queen made a sleight to Donald Trump in reference to his noisy arrival in the UK during a visit (Image: GETTY)

Donald Trump committed a ‘mortal insult’ against the Queen when he turned his back on her shown here (Image: GETTY)

Mr Trump said: “I have such a great relationship and we were laughing and having fun.

Within that time frame, the Queen celebrated her Golden and Diamond Jubilee as well as a number of landmark occasions within the Royal Family.

In a surprising statement, Mr Trump then said: “Then I got criticised for it because they said we were having too much fun.”

JUST IN: Queen ‘knew how special Diana was’ after she ‘cradled future Princess’

Donald Trump claimed the Queen had the ‘best fun’ she had in 25 years (Image: GETTY)

Since ascending the throne in 1952, the Queen has met every US President from Harry Truman with the exception of Lyndon B Johnson.

During her near-69 years as monarch, she has refrained from making comments about political figures.

However, during a rare interview on The Queen’s Green Planet, she seemed to take a swipe at Mr Trump.

During the ITV documentary, which first aired in 2018, she took Sir David Attenborough on a tour of Buckingham Palace Garden.

The Queen discussed the trees she had planted for each of her children and later “joked about the noise of the helicopters in the skies of London”, ITV News reporter Chris Ship claimed.

The Queen is predicted to have an easier relationship with US President Joe Biden (Image: GETTY)

As the helicopter blades whirred overhead, the Queen clenched her teeth together and gave what appeared to be an unimpressed and uncomfortable look.

She pointed her left hand to the sky and remarked: “That sounds like President Trump.”

Sir David laughed at the comment and later during an interview with Mr Ship, the journalist remarked that it was “unusual” for the monarch to reference the former US leader.

He noted that the Queen had to “tread a very careful line” even when talking about climate change – despite effects of global warming being experienced all over the world.

Mr Ship said: “It was very unusual for her to mention that.

Donald Trump could be ‘kingmaker’ in new party says expert

“I suppose we shouldn’t link the two but she did also talk about Donald Trump, I think she mentioned [him] flying overhead in a helicopter.”

Sir David, who has been a friend of the Royal Family for decades, responded: “Yes, she did.”

Mr Ship continued: “And, the reason I mention that is because Donald Trump isn’t known for his belief in the science behind climate change.

“Yet within the film, as I mentioned earlier, we saw the Queen talking about some subjects that perhaps we wouldn’t normally expect her to talk about.”

Mr Ship added: “I mean Donald Trump is not one you’d expect the Queen to comment on.”

But the naturalist, whose new show A Perfect Planet will broadcast its final instalment on Sunday, had a different take on their exchange.

With a laugh, Sir David said: “It was a passing reference, I think.”

Sir David is not a fan of Mr Trump and when asked what to do about the US leader ahead of the 2016 election, he quipped: “We could shoot him.”

After his comment to The Radio Times, he remarked that there was no other “alternative” ahead of Mr Trump’s victory over Hillary Clinton, by 304 Electoral College votes to 227.

He said: “Do we have any control or influence over the American elections? Of course, we don’t.”

During Mr Trump’s 2018 visit to the UK, royal historian Ian Beck felt that he had committed a “mortal insult” in front of the Queen.

On Twitter, he wrote: “Trump has also turned his back on the Queen… I have always believed this to be a mortal insult to a monarch.”

The former US leader walked in front of Her Majesty while they inspected the guards at Windsor Castle.

He also breached protocol by revealing what the Queen had told him about Brexit during an interview with Piers Morgan on Good Morning Britain.

Since President Biden’s victory over Mr Trump in the November elections, many expect an easier relationship between the royals and the US leader.

Mr Fitzwillaims told Express.co.uk that the Queen would be “personally relieved” by the election result.

He said: “As the world’s most experienced head of state, she will undoubtedly appreciate the importance of America having a President with so much experience.

“Especially during the unprecedented crisis of the Covid-19 pandemic.”